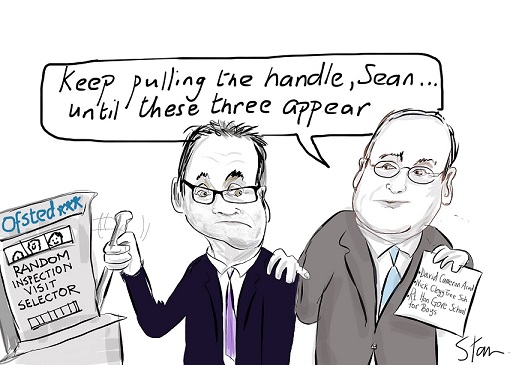 NB – This story was published as an April Fool’s story.

Three new free schools due to open after the election will be named after leading politicians – including Prime Minister David Cameron.

Funding agreements, stating the school names, were signed off by the Government before Parliament dissolved on Monday.

The agreed schools include the David Cameron Academy in Oxfordshire, Nick Clegg Free Primary in Sheffield, and the Right Hon Gove School for Boys in Surrey.

The sensational disclosures have prompted an angry response from Labour.

It accused the schools’ leaders of trying to “curry favour” with the country’s decision makers to ensure funding for their schools.

A Labour source added: “This is truly preposterous. These school leaders are shamefully stroking the egos of politicians to curry favour for their schools.

“We need to get tough on the lax school naming rules which leaves it down to school founders to do as they please.”

However a Conservative insider told Schools Week: “Labour is probably just annoyed because Ed Miliband has been overlooked.”

The original deadline to sign off new schools was believed to be March 20, so paperwork could be finalised before purdah started – the pre-election period where public bodies have to act in a politically-neutral manner.

However Schools Week understands the applications were given financial backing just hours before Parliament officially dissolved.

The David Cameron Academy look set to be run by the News Mogul Schools Trust and will be based in the market town of Chipping Norton.

It will admit a total of 800 pupils and “create a lasting legacy” through a focus on media and technology.

It is unconfirmed as to whether the school is linked to a previous bid from News International in 2011 to open a free school in east London.

Right Hon Gove School for Boys will open for 900 boys in Surrey in 2016. It aims to bring a revolutionary approach to educating youngsters, with a specialism in maths.

Sponsored by the Elizabeth Trust, the school will promote a Chinese approach to teaching maths, including banning the use of calculators.

The Nick Clegg Free Primary will teach up to 420 pupils and will provide free school meals to all. The school has also promised funding to cover the future university tuition fees of all children.

The leak follows Cameron announcing 49 new free schools earlier this month. New free schools and academy conversions are free to change their name as they wish.

Last year the scandal-hit Kings Science Academy, one of the country’s first free schools in Bradford, changed its name to the Dixons Kings Academy after joining the Dixons chain.

A Coalition insider, known on twitter as “Tory Education”, was pleased to learn of the disclosure.

“This is just one more example of academies exercising their new-found freedoms. This is what winning looks like. Except for that Clegg school. That sounds rubbish.”

A statement is due at midday today, 1 April, with further details.