Pupils taking exams are being denied access to their “normal way of working” because the use of technology has not been embraced by exam boards.

Speakers at a Westminster Education Forum seminar this morning called for greater integration of technology into testing in England, but representatives of a leading exam board and regulator Ofqual raised serious concerns about the impact increased use of technology could have on the reliability and fairness of exams.

Caron Downes, a classics teacher at St Olave’s School in York asked why technology isn’t used more often in tests, when it has become such an integral part of pupils’ day-to-day lives outside the exam hall.

Classrooms are “stepping into this changing world” and using technology to enhance lessons and prepare pupils for exams “with everything at their fingertips”, but when it comes to the actual test, pupils are told to “leave their tech at the door”, she said.

“When else in your life will you ever be told that you have to sit in a room with a pen and write as quickly as you possibly can? We want to allow [pupils] to use what is their normal way of working.”

Nansi Ellis, assistant general secretary for education, policy and research at the National Education Union, agreed the system needs to be modernised, but said that instead of getting “bogged down” in attempts to introduce technology the current paper-based system, the focus should be on “thinking about assessment differently”.

“This is not just about assessment, it’s about how we teach and how children learn, and what we need to therefore be thinking about assessing as we move forward,” she added. “The way in which learning and teaching are moving need to be reflected within the examinations system.” 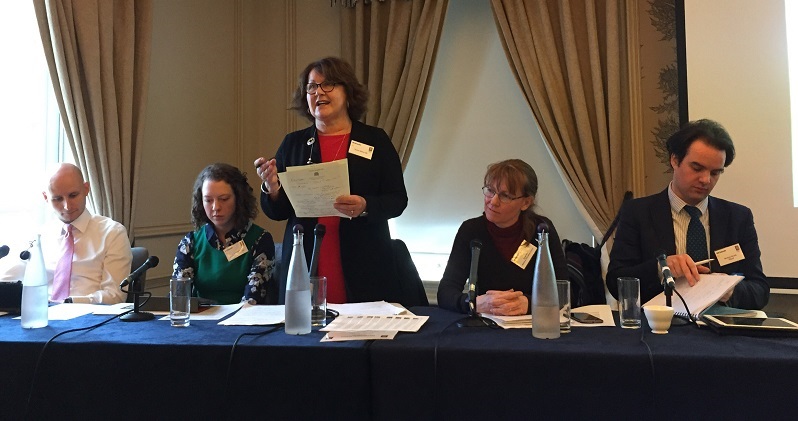 But can fairness really be guaranteed in an exams system that embraces technology? Dale Bassett, head of curriculum strategy at AQA, has his doubts.

“Particularly in high stakes qualifications like GCSEs that principle of fairness is really, really important,” he said.

“While in principle I would absolutely agree with the vision Caron set out, we would not want to move to a system where we allowed students to use technology on an opt-in basis until we could be confident that there was that level of fairness enshrined.”

There are also difficulties in controlling for environmental factors, and how different modes of assessment affect the way different pupils perform, Bassett explained.

His warnings echo recent research by UCL’s Professor John Jerrim, which looked at a move to a computer-based test for PISA studies. The research found that pupils taking the tests on computers performed differently, and warned this made comparisons between their results and the results from previous years highly unreliable.

If using computer has a material impact on how students perform in the exam “its really hard for us to compensate for that after the event”, said Bassett. “We would want to be confident that that wouldn’t be a distorting effect.”

Ofqual’s Richard Garrett agreed, saying fairness couldn’t be guaranteed without making sure the use of computers doesn’t advantage some pupils over others, particularly those who have had less exposure to technology.

“Exam boards have also got a responsibility to make sure that it doesn’t matter which school you go to, that actually you get the same experience.”