Fewer than one in five teachers now believe Ofsted is a “reliable and trusted” judge of school standards after confidence in the watchdog plunged this year.

The annual teachers’ survey, which quizzed over 1,000 teachers on their awareness and perceptions of Ofsted, was published today.

Teachers who have been recently inspected were less likely to disagree with the statement than those who were inspected one to two years ago.

The findings are likely to be a big blow to the inspectorate as it prepares to introduce a new framework this September. 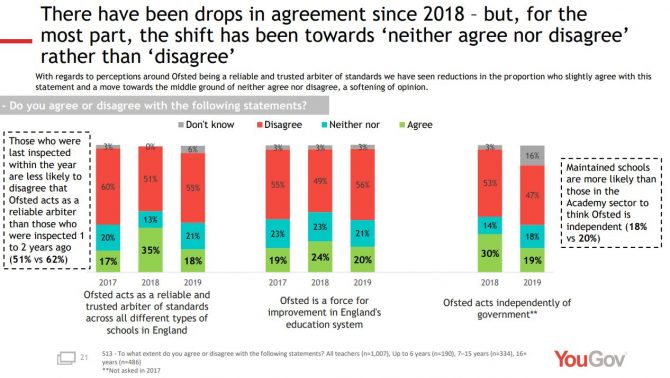 There has also been a big decrease in agreement that inspections are important and necessary to monitor performance and hold schools to account. Just 38 per cent respondents agreed with this statement, compared to 50 per cent last year.

Like last year, half of all teachers said that Ofsted inspections mean doing extra and unnecessary work. However, the proportion of teachers who felt the final judgement reached by Ofsted was fair and accurate has also remained stable at 61 per cent.

Seven in 10 said their last inspection was pretty much in line with what was expected, while half (52 per cent) said the inspection team was ‘professional but detached’.

A spokesperson for Ofsted said it had received a lot of “positive feedback” on its new inspection framework and is “looking forward to seeing how the new inspections are received by school staff from September.”

“We know from this survey that teachers who have been inspected more recently tend to be more positive, and we hope that trend continues under the new inspections.”