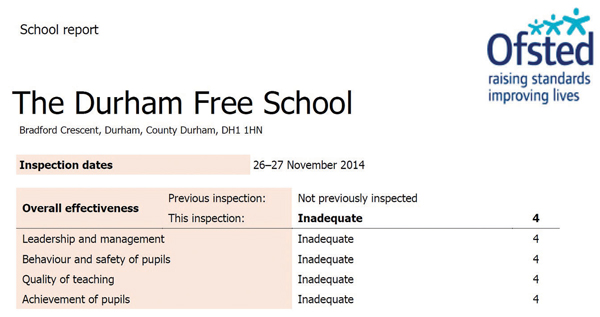 The British Humanist Association (BHA) has welcomed the decisions by Ofsted and the Department for Education (DfE) in relation to Durham Free School and Grindon Hall Christian School.

The national charity said it had raised concerns with the DfE about governors and the curriculum at the schools when they applied to open in 2012.

And at Grindon Hall Christian School, the inspectorate said the curriculum was not adequately preparing pupils for life in modern Britain, and said pupils were not being taught to develop “appropriate” levels of respect or tolerance for those from other faiths and communities.

BHA chief executive Andrew Copson commented: “We welcome Ofsted and the DfE’s newfound willingness to address the issues it has identified in these two schools, which include racist and homophobic language used by pupils [at Durham Free School].

He said he hoped it would signal a change of approach.

Mr Copson added: “It is vital that every young person receives a broad and balanced education, including teaching about the range of religious and non-religious beliefs that are commonly held in Britain today.”

Nicky Morgan last week announced she wanted to close Durham Free School, leading to parents and staff launching a campaign to save the school – with an e-petition so far receiving 700 signatures.