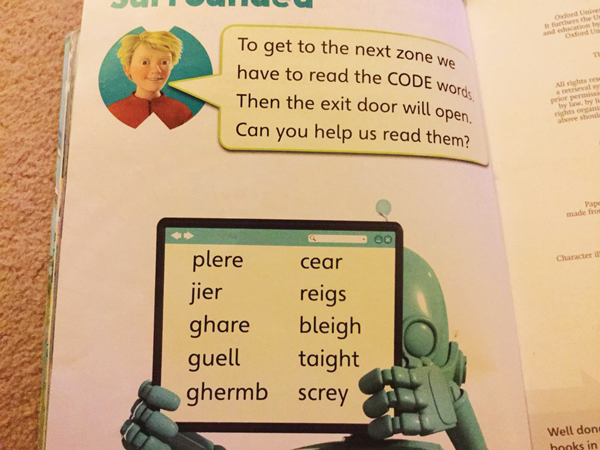 Parents and professionals have been left baffled by a list of nonsensical words in a phonics book with no clear way to pronounce them.

An anonymous blogger, known by the pseudonym “itsmotherswork” recently shared an image from a Project X Code book that her youngest daughter was reading.

The words (pictured above) include “cear” “ghermb” and “guell”. Many commenters on social media were also confused about the correct pronunciation.

The phonics screening check, introduced in 2012, is an individual, oral assessment of pupils that requires them to read words and pseudo-words. Children are taught grapheme-phoneme correspondences (GPCs) such as the pronunciation of “ch” in different words.

The blogger has four children aged 8, 10, 13 and 15, and said she could see how the emphasis on phonics had increased over the years as each child had learned to read. This has affected her youngest child’s enjoyment of reading.

Speaking to Schools Week, the blogger said: “The book she brought home this time had quite a dull text, where it was obvious that the story was reinforcing learning of certain phonemes (“aight” in straight and “eil” in unveil and abseil).

“She read these fine, but then it had a list of complete nonsense words at the end, and she simply rejected them outright, saying ‘they’re not words’. And she was right!

“I tried them out, and so did my 15-year-old, but there were a number of possible different pronunciations of some – ‘plere’ as in here, or there, or were? And some were strings of letters that I’ve never seen together in any English word. I don’t know why the publishers thought the list was necessary and it wasn’t very clear what it was for.”

She said: “If the authors had used the GPCs actually used in the phonics checks, they wouldn’t have chosen those words because they contain GPCs usually not taught by that stage.

“English spelling is contextually based: some spellings never appear next to other spellings, such as the ‘mb’ after ‘er’.”

Itsmotherswork added: “Nonsense words aren’t a problem in themselves; all my children have enjoyed books by Dr Seuss and Edward Lear. And what’s the Gruffalo, if not a nonsense word brought to vivid life?

“My problem with this particular book is that children are reading for meaning. It’s possible to invest a nonsense word with meaning through the context it sits in.

“A list of nonsense words, especially when their phonics learning value is dubious, as was the case with these, has no meaning or interest for a child – as my daughter made clear.”