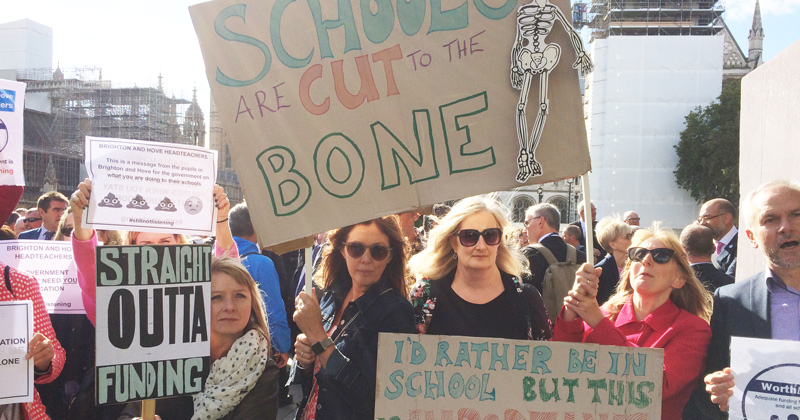 An education minister has insisted her boss didn’t “snub” headteachers, despite claims he refused to meet leaders campaigning against school funding cuts.

During education questions in the House of Commons today, skills minister Anne Milton defended the education secretary Damian Hinds after a group of heads claimed last week they were turned away when they tried to meet with him.

Ministers are under increasing pressure to address concerns over school funding. Around 7,000 headteachers across England have written to 3.5 million parents about the issue in recent months, and the WorthLess campaign, organised by headteachers, revealed last week that Hinds has twice refused to meet its representatives.

Pressed by Angela Rayner, the shadow education secretary, on why Hinds had refused to meet heads, Milton insisted there was “no snub from the secretary of state”. Rayner had not used the word “snub” in her question.

“There is no snub, no snub from the secretary of state, at all. He meets headteachers all the time.”

Milton was also warned by speaker John Bercow for saying Rayner’s claims were “not an honest representation of the secretary of state that I know”. Under Parliamentary rules, MPs are not allowed to accuse each other of dishonesty. Bercow said Milton’s comments were “borderline”.

In their letter to parents, headteachers warned that “there isn’t a headteacher in England who isn’t very concerned about the cuts we’re having to make”.

“At the same time we’re finding ourselves fulfilling the role of a fourth emergency service, and plugging gaps in areas such as children’s social care and emotional wellbeing. Parents have a right to know that schools are facing enormous challenges and we will continue to state the facts until matters change.

“A crucial starting point is meeting the secretary of state.”