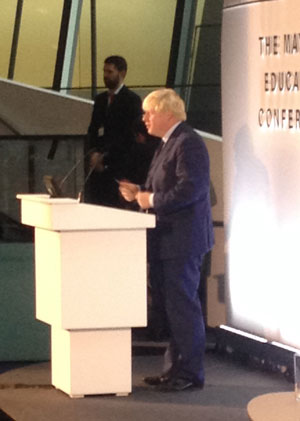 Speaking at City Hall, the Mayor of London called for more competition in education, suggesting that politicians should look again at introducing selective grammar schools.

In answer to an audience member’s question, the Mayor said: “Competition in children is inevitable and the evidence I see is that kids love competing.

“There should be some sort of academic recognition and I see that as a way forward. We should be open about it.

“The fee paying sector is the one sector where academic selection is legally possible, and we should have a look at that. It shouldn’t be taboo.”

The Mayor gave the example of his own selective school, Eton College, as a place that helped people succeed in the future.

“It gave us a horrific urge to do better so it should not be an anathema.”

Mr Johnson took a poll of the audience during the session, asking people to raise their hands in favour of grammar schools and then against. The result was in large favour against the idea.

This sparked a debate amongst the audience and Mayor, finishing with him saying: “I’m going to leave before I get lynched.”

His comments come after announcements that Kent County Council have resubmitted plans to open an annexe to the all-girls Weald of Kent Grammar School in Sevenoaks.

Home Secretary Theresa May has also backed plans for the new grammar school annexe in her own constituency of Maidenhead, Berkshire.

UKIP also announced during their party conference earlier this year that they would introduce a grammar school in every town if they were to gain power at the next election.

The Department for Education have said they are still considering the grammar school proposals however Education Secretary Nicky Morgan recently said that there would be “no new grammar schools” while she was in office.