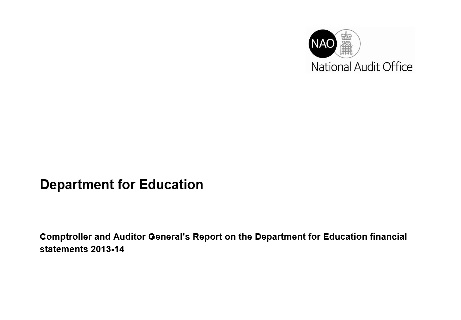 The National Audit Office has criticised the Department of Education over its annual financial statement saying it is not a “true reflection” of activity by its groups of bodies.

Comptroller and Auditor General Amyas Morse has attacked the DfE’s decision to consolidate the financial statements of academy trusts alongside those of the department itself when they have different reporting periods.

He has now called on the DfE to work with the Treasury to come up with a solution because it is not meeting the accountability requirements of Parliament.

The DfE has also spent £166 million more than the Resource Annually Managed Expenditure limit authorised by Parliament though this was primarily down to underestimating of the increases to pension costs relating to the academy sector.

Mr Morse said: “I recognise the importance of not placing unnecessary additional burdens on the academy sector. But the inability of the Department for Education to prepare financial statements providing a true and fair view of financial activity by its group of bodies means that it is not meeting the accountability requirements of Parliament.

“In particular, I believe that, if the challenge posed by consolidating the accounts of so many bodies and the fact that so many have a different reporting period is to be surmounted, the Department and Treasury need to work together to find a solution.”

For 2013-14, there are 2,591 bodies consolidated into the group financial statements, including the 2,585 academy trusts which operate 3,905 individual academies.

The DfE must produce its financial statements by a year end of March 31 whereas for trusts this is August 31, to align with the end of the school year.

Instead of changing the reporting period for trusts or requesting a second set of statements to cover the period to the end of March, which the DfE says would require extra resource, it has made adjustments using centrally collated information where necessary.

The DfE says financial data for the year to the end of August, with the adjustments, would not be materially different for the equivalent to the end of the following March.

While the NAO acknowledges improvements have been made to the consolidation process, the fact the number of academies has grown by a further 1,082 during the year means there is more scope for potential error.

However, Mr Morse has not identified any material inaccuracies in the financial statements of the individual bodies making up the group.