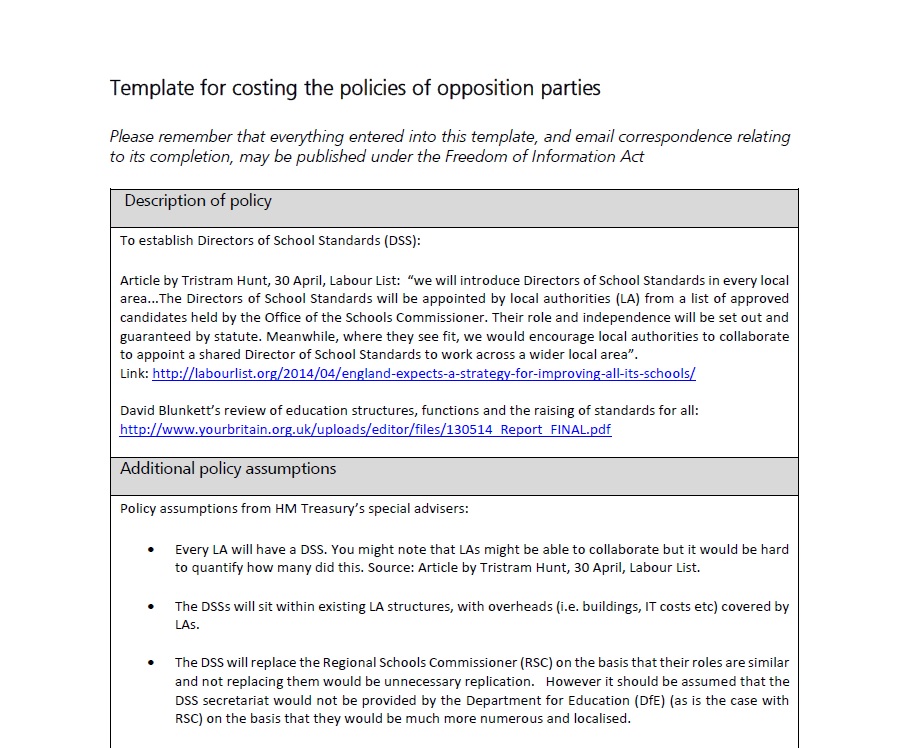 Labour’s school policies could cost more than £1.8bn to implement should the party win the general election, the government has claimed.

The figures were released by the government in a raft of opposition party policy costings – one of the opening shots in the general election campaign.

On Labour’s policy to introduce Directors of School Standards as a ‘middle tier’ of accountability for schools, the Treasury estimates it would cost between £65.55m and £68.02m per year.

It also estimates that Labour’s plan to require all teachers to gain qualified teacher status would cost £386m over five years.

Plans to increase the number of university technical colleges (UTCs) – based on an estimate of 100 over the next parliament – is given a cost of £1.4bn up to 2025/26.

Ed Balls has called for a “major expansion” of the UTC policy, with former Labour education minister Andrew Adonis proposing that 100 new UTCs be established in a report last year.

Produced by the Treasury (and the Department for Education in the case of the unqualified teachers policy), the costings note several assumptions made in the calculations.

Responding to the claims, Shadow Education Secretary Tristram Hunt said that the costings were based on “bogus claims and untruths”.

He also said: “Labour has made no unfunded spending commitments. We are undertaking a zero-based review of departmental spending.”

The Liberal Democrats distanced themselves from the costings. A Lib Dem spokesperson described them as “private advice” produced for the Conservatives, and said they had not been signed off his party, as would generally be the case with government documents.

The spokesperson said: “Unless the other parties say they will also protect education funding, parents and teachers will find their squabbling completely irrelevant.”

Article updated at 14.25pm, 5 January 2014 to reflect Labour’s response to the claims, and updated further at 18.05pm with the Lib Dem’s reaction to the costings.