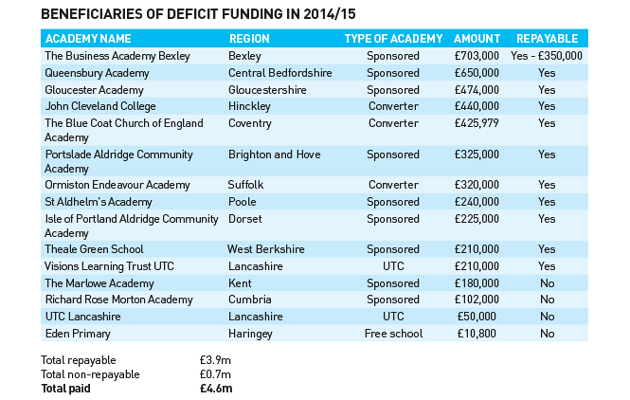 The government has handed out more than £8 million in emergency funding to cash-strapped schools in the past three years.

Freedom of information figures show that since 2013-14, the Department for Education (DfE) has paid out a total of £8.2 million in deficit funding to help schools to balance their books. More than half (£4.6 million) was paid out in 2014-15 alone.

The largest single payment of £700,000 was made to The Business Academy Bexley, one of the Labour party’s first flagship academies.

Bexley was opened by Tony Blair in 2003. It cost £31 million to build and was designed by architect Lord Norman Foster. But it reportedly had a raft of costly problems, including a leaking roof and a failed ICT system and had to be bailed out after running up a deficit of more than £650,000.

In 2014, the government issued the school with a financial notice to improve after a failure by trustees to provide “adequate financial and governance oversight and challenge”. It was ordered to undertake a series of actions, including an external review of governance.

The school did not respond to a request for comment. It is unclear whether the action plan points have yet been met, but the financial notice to improve remains in place.

Academies apply to the government when they are unable to balance their budget any other way.

The DfE says the cash helps them to get on to a sound financial footing while protecting pupils’ education.

However the pay-outs show the costs of conversion are not always straightforward and, in some cases, more cash is needed to entice new sponsors.

It raises questions over whether the £500 million set aside to convert the remaining 16,000 state schools is enough.

Last year Schools Week revealed that
£9 million in deficit funding was paid out between 2011 and 2013. None had to be repaid.

The new figures show a notable difference – with £5.4 million of the £8.2 million due to be paid back. Bexley, for example, will have to pay back half.

The second largest payment of £650,000 was given to the Queensbury Academy, in Bedfordshire. All the money will have to be repaid.

A spokesperson for the CfBT Schools Trust, which sponsors the school, said the cash covered an anticipated shortfall of pupils after it converted from an upper to secondary school. It followed a council decision to move all its schools into a
two-tier system.

The spokesperson said: “Student numbers are rising rapidly, as predicted. We expect the school to break even in 2016-17, and anticipate being able to start repaying the advance in 2017-18.”

Gloucester Academy was given £474,000, all of which must also be repaid. The school joined the White Horse Federation in March 2015 after falling into special measures. The trust said the deficit cash was used for initial funding issues and for “rapid improvement initiatives”.

The school lost £1.2 million after it was targeted by a “sophisticated fraud” and was put into special measures in 2013 before it was taken over by the Ambitions Academies Trust last year. Ofsted said last month the school had been transformed.

A DfE spokesperson said: “Deficit funding is decided on a case by case basis and is only provided in rare circumstances where schools are facing significant financial pressures. It is only provided once a robust and affordable recovery plan is in place.”