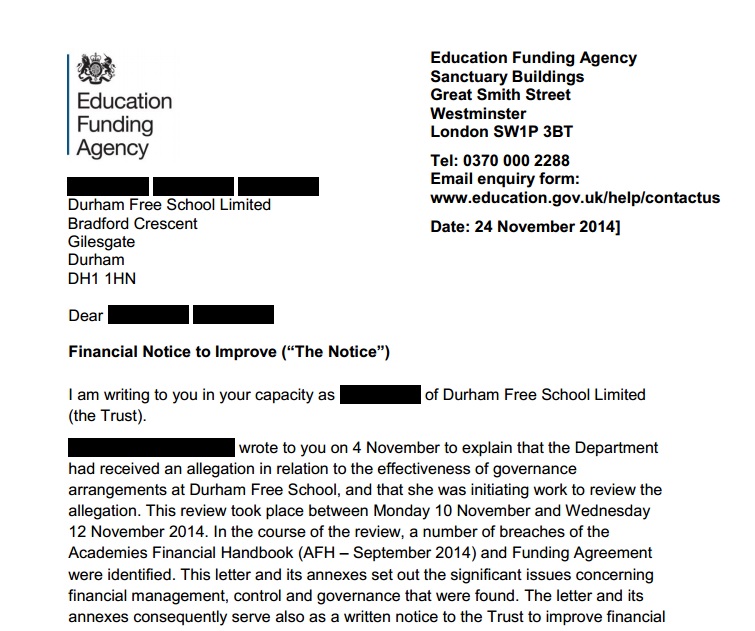 A slew of financial notices to improve for academy trusts have been published this afternoon by the Education Funding Agency (EFA), in the sector’s own ‘Black Friday’.

Four academy trusts have been hit with the notices to improve after a number of financial management and governance concerns were identified.

In all cases, the trusts have had delegated spending authorities revoked, and must now seek approval of their transactions from the EFA until the notice to improve is lifted.

One trust, the Business Academy Bexley, accrued a “significant” cumulative deficit of £656,000 as of 31 August 2013, the EFA said. The funding body also said that the notice to improve had been served because of significant cash flow difficulties, and failure by trustees to “provide adequate financial and governance oversight and challenge”.

Durham Free School, which opened in 2013, was told that a review earlier this month had found “significant weaknesses in financial management and governance”, which the trust were required to rectify.

Among the actions required by the EFA is the establishment of a separate Audit Committee. The trust has also been told that a competitive tendering policy must be used for the purchase of all bought-in services.

Theale Green Academy Trust was issued with the notice to improve after accruing a significant forecast cumulative deficit, and experiencing cash flow difficulties. The trust has had to request an advance of £40,000 of funding, the notice said.

In the case of the Bishop of Rochester Academy Trust, the EFA said that the notice to improve was being issued because of a failure to submit an accurate budget forecast as at 31 July 2014, and to provide an accurate revised forecast of its spending in response to a request from government in October

The EFA also said that the trust had a significant expected cash flow deficit, and that governance arrangement were not providing sufficient scrutiny of budgets and financial management.

A pre-warning notice sent to Trinity Academy, in Blyth, Northumberland over “unacceptably low” student performance has also been published, though was sent out in June.

The letter from Education Minister Lord Nash said that assurance was being sought that “both the quality and pace” of improvement plans was sufficient, to address the performance concerns, and that Secretary of State was inclined to exercise their power to appoint additional governors at the school.