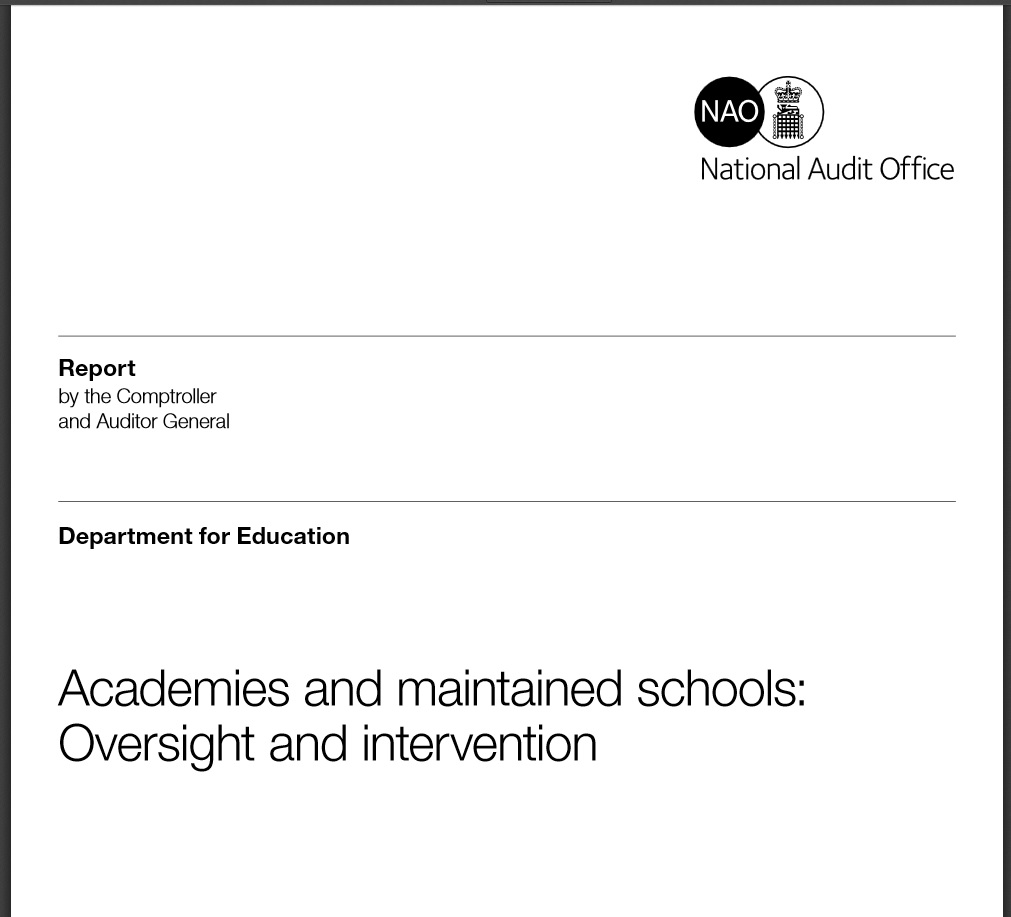 More than half of underperforming maintained schools did not improve after ‘formal intervention’, such as a change of governance or turning the school into an academy, says the National Audit Office (NAO).

They did better where there was no formal intervention, despite the cost of overseeing school improvement reaching £382m a year, the public spending watchdog has found.

The NAO report, Academies and Maintained Schools: Oversight and Intervention found that the Department for Education (DfE) had not demonstrated the effectiveness of interventions, which meant the system could not be said to be achieving value for money.

The DfE, however, said the conclusions were “simply not supported by the facts”.

“Despite the system spending over £382m on overseeing schools, the department does not know enough about what’s going on in them.”

The NAO found that while educational performance had improved overall, about 1.6m children still attended schools judged by Ofsted to be less than good.

The spending watchdog also found that 15 per cent of schools had not been inspected for more than four years as at August 2014, and that the DfE had “limited measures” to receive an early warning of a decline between inspections where exam results were not affected.

Such information was largely limited to annual financial reporting by schools, and information from whistleblowers, it said.

The need to rely on whistleblowers was “a sorry state of affairs”, Ms Hodge said.

The NAO also said that the DfE did not know why some academy sponsors were more successful than others, and did not collect information about the type of support that sponsors gave to underperforming schools.

“It has been clear about the need for schools to improve, and nationally education performance has done so. But there are significant gaps in the department’s understanding of what works, and the information it has about some important aspects of school performance is limited.

“Greater school autonomy needs to be coupled with effective oversight and assurance. The department has made some improvements but has further to go.”

The DfE said that between August 2010 and August 2014 the proportion of schools rated as satisfactory (now requires improvement) or inadequate dropped from 32 to 19 per cent.

A spokesperson said: “England’s schools have been transformed over the past few years with 800,000 more children now being taught in good or outstanding schools since 2010.

“This is a great achievement but we would be the first to admit that the job is not yet done. Any child being taught in a failing school is an opportunity lost, which is why we have intervened in more than 1,000 failing schools over the past four years — pairing them up with excellent sponsors to give pupils the best chance of receiving an excellent education.

“There will always be more to do and we are certainly not standing still, but with more children being taught in good or outstanding schools than ever before, the NAO’s conclusions are simply not supported by the facts which show the huge progress made thanks to our plan for education.”

The Public Accounts Committee will meet on November 17 to discuss the report.

Read Schools Week’s Laura McInerney’s expert article on the report: The 13 most critical points in the NAO’s Academies and Schools Oversight report