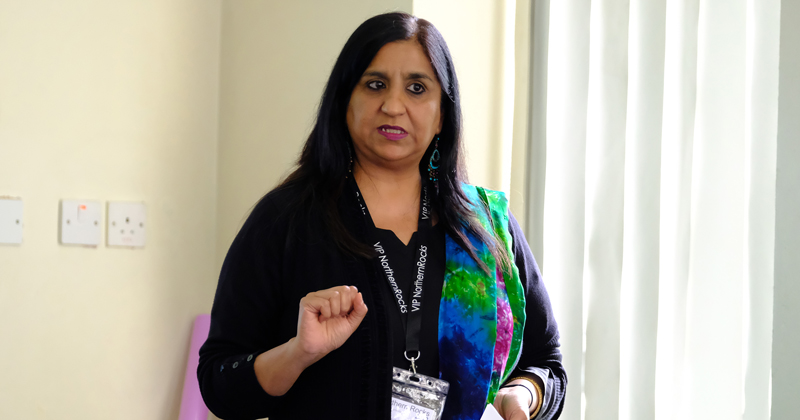 White pupils from low-income families are the group with the lowest GCSE scores in England, admitted Sameena Choudry, founder of Equitable Education, but focusing on the group is “crude” and inappropriately “lumps pupils together” who should be separated.

In an impassioned session, Choudry — whose organisation offers consultancy on reducing achievement gaps between ethnic groups — presented data showing that the image of white students as those inevitably furthest behind is more complicated.

“When we talk about black African pupils — who do we mean? When you look at Igbo language speakers, they are doing much better than the average. But if you are a Portuguese speaker of black heritage then you’re not doing well at all.”

Choudry said that the focus on white pupils receiving free school meals was important — “their attainment is poor and as a society we should be ashamed of that” — but she questioned media headlines that claimed that these pupils were “working class”.

“More than half of people asked will say they are working class, but the number on free school meals is much smaller,” she said.

She directed particular ire at Ofsted’s annual report, which highlighted the issue of white pupils and has been discussed repeatedly by Sir Michael Wilshaw, the chief inspector,  in speeches and commentaries over recent months.

“I look at the data and EAL [English as an additional language] pupils in Yorkshire and the Humber are significantly under-performing. That is what I see. I didn’t see it in the Ofsted annual report, though. Why is that?

“It is very irresponsible in the way it [the data] is put in the annual reports. The Ofsted annual report should be absolutely impartial and should not be twisted to look the way headlines look.”

White pupils are specifically mentioned four times in the 2014-15 Ofsted annual report. There is no mention of children with English as an additional language.

While pupils with EAL as a national group have higher GCSE results than those who speak English as a first language, the picture is highly influenced by the high number in the capital. EAL pupils in every region outside London have worse outcomes than their regional peers.

Choudry called for the government to release more data, and collect more refined information, so that researchers could better understand how black and minority ethnic students are achieving within education.

“The information that we have is very crude and it’s hard to find a lot of it. The Department for Education is not publishing this. It is charities, such as the Bell Foundation, and academics, on their own time — there is no funding — who are having to do this analysis.”

From October schools will be asked to provide more information on pupils who have English as an additional language, but Choudry is concerned that with “no training, no support” and levels “broadly based on the Welsh language system” the information will be “messy and inaccurate”.

Still, she said, “it will be better than the EAL/not-EAL label which is what we have at the minute . . . and it doesn’t tell us anything”.