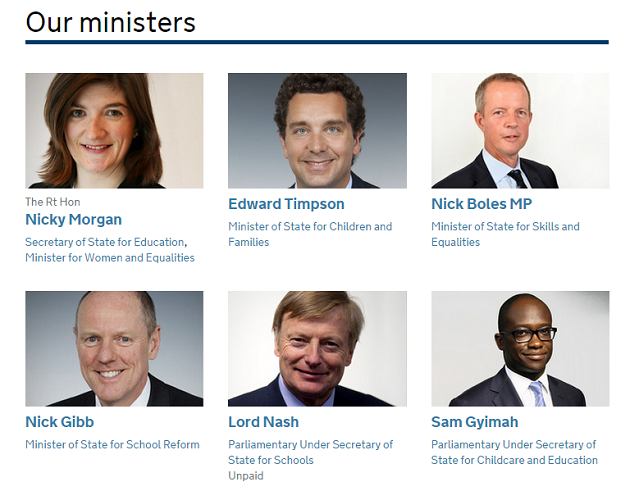 David Cameron’s ministerial reshuffle has left the top team at the Department for Education relatively untouched.

Nicky Morgan, Nick Gibb, Edward Timpson, Nick Boles, Sam Gyimah and Lord Nash have all been re-appointed to roles in the department.

Ms Morgan’s re-appointment as education secretary was confirmed at the weekend.

While Nick Gibb and Nick B0les have kept their briefs as school reform minister and skills minister respectively, Edward Timpson, previously a parliamentary undersecretary of state, has been promoted to the role of children and families minister.

Sam Gyimah will continue to serve as parliamentary undersecretary of state for childcare, while Lord Nash is in the same position, but retaining his brief for academies.

The only addition to the department is Caroline Dinenage, the MP for Gosport, who will hold the DfE’s equalities brief alongside her ministerial post at the Ministry of Justice, now run by former education secretary Michael Gove.