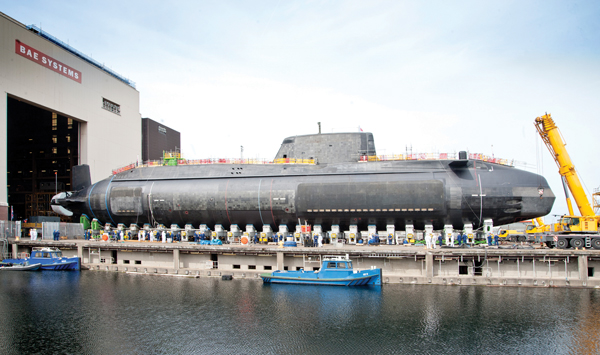 The government has chosen an arms manufacturer as its preferred sponsor to turn around a failing academy in the north of England.

It has set up a trust to run the school under its submarine-building arm, which is based in the town.

The company will build new nuclear-powered ballistic missile submarines, should the UK’s Trident programme get the go-ahead next year.

BAE Systems Marine Submarines Academy Trust will be tasked with turning around the troubled school that has been in special measures since March 2012.

Despite a subsequent Ofsted inspection in May 2013 and five monitoring visits, inspectors say it is still not improving enough. Tony Johns, the managing director of BAE Systems Submarines, said in a statement: “We have for a long time supported local education at primary, secondary and college level, and see this positive step as an extension to our commitment in helping Furness Academy provide its students with the best possible education.”

The trust is now going through due diligence before a consultation with stakeholders, parents and staff. It is expected that a funding agreement will be signed ready for the trust to take over in September.

If agreed, the trust will become the academy’s sole sponsor, taking over from the University of Cumbria, Furness College and Barrow Sixth Form College, and will provide “strategic direction” in areas including leadership, business management and back office expertise.

A spokesperson said the company could not provide further details of the sponsorship while it was in due diligence.

Campaigners are uneasy at a school being run by a company that “profits from selling arms to some of the world’s most oppressive dictators”.

Sam Robinson, university coordinator for the Campaign against Arms Trade, said: “The idea [BAE] could soon be playing a significant role in running one of our schools is deeply worrying.

“It . . . gives them direct access to potential future employees and often allows them to influence the curriculum to suit their employment needs.”

BAE said it did not want to respond to the comments but Mallen Baker a writer, speaker and strategic adviser for corporate social responsibility, said it was a popular concept for companies to invest in the education of their local community.

“Employers recognise that the quality of local recruits is influenced hugely by their quality of education,” he told Schools Week. “Companies that invest in the local community will also get higher loyalty rates.

“With BAE there is an additional factor – they deal with a controversial product. “But armament is essential for the defence of the country and we believe in the right for our countries to defend themselves.

“There are no reasons why it shouldn’t be able to show itself as a good citizen as other companies do. The only people to make that decision are the school and the local community.”

Barrow-in-Furness Labour MP John Woodcock said the takeover was “really exciting” news for the town. Anne Attwood, chief executive of current sponsor Furness College, has also been reported as saying having BAE as its sole sponsor will be good for the students and community.

The Guardian reported in 2007 that BAE, while under investigation after allegations of corruption, had offered £400,000 to sponsor the academy.

While it did not go on to be a sponsor, the academy’s annual accounts show BAE makes an annual donation, which could be as much as £40,000.

Ted Creighton, chair of governors, told parents of the sponsorship switch in a letter last week.

Mr Creighton, who is also BAE’s head of learning and organisation development, said no one from the school was available to comment because Ofsted inspectors were visiting this week.

A number of university technical colleges (UTCs) set to open in September have also partnered with military and arms firms. BAE is listed as a partner at Humber UTC, in Scunthorpe, where it will work to design and deliver projects for students.

The arms firm is also one of the partner companies at Medway UTC, in Chatham, Kent, which will specialise in construction and engineering.

Medway’s website says that BAE will support the design of its curriculum and be involved in governance.

South Wiltshire UTC, which specialises in science and engineering, will open in Salisbury in September. Its supporters include QinetiQ, which provides defence technology, and Chemring, which makes munitions, including explosives and tear gas.

Guidance for UTC sponsors state that they can help construct the curriculum to reflect the needs of their particular sector and build close links with students who will be potential employees.

Rolls-Royce, which reportedly made $5.6bn from arms sales in 2012-13, is a co-sponsor of the Cabot Learning Federation, alongside the University of the West of England. They sponsor 12 academies in the south west of England.

While the election campaign rages on, schools are mostly getting back to business after the Easter break. Exam deadlines loom, as do summer fetes, school trips and summer plays.

For some school leaders, decisions must be made now that affect their school’s future.

Take Furness Academy, featured on the cover, and currently in the process of transferring to the sponsorship of BAE. The school has struggled for a long time. BAE is offering strategic support and a fresh start. It is a business embedded within the community. On the other hand, it creates objects that are instruments of war. Which aspect wins out? Which ought to?

In Telford, four schools are being transferred from one sponsor to another, while AET – the largest academy chain in England – has shed eight schools.

Each process of change involves nervous questions: Must we rename the school? What about the uniforms? Will all staff keep their jobs?

This emerging ‘transfer market’ in schools is both exciting and deeply challenging. Exciting because it gives poorly performing schools a shot at future success. Challenging because questions will always arise about the ‘appropriateness’ of sponsors and their plans.

The election is indeed important but these future-changing decisions are crucial too, that’s why we will keep covering them along with the campaign highlights, too.

Responses to The guy