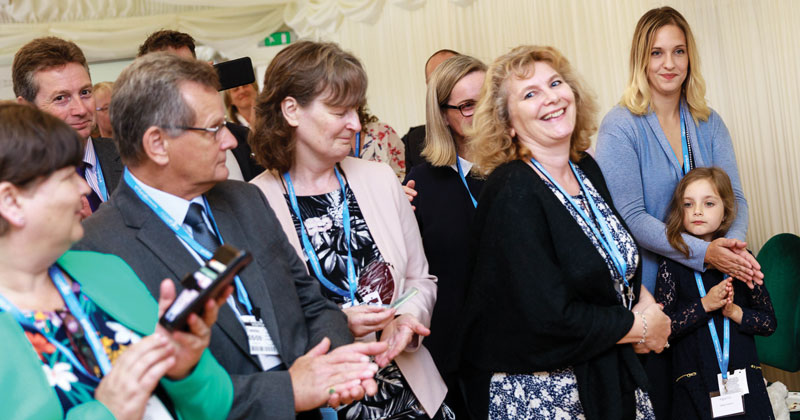 The awards, organised by the National Governance Association, have been running since 2007, and celebrate the work of school governors across England.

Millennium Primary School has gone from bordering on special measures in 2013 to ‘outstanding’ in its 2015 Ofsted inspection, and now leads the Maritime Academy Trust. Tiffany Beck (pictured above, second from right), its chair of trustees, said the key to the school’s success had been a “relentless” governing body, which put the “best interests of the kids and the school” at the heart of debates.

“It’s key having an effective relationship between the chair and the head as well,” she said. “I think a lot of governors sometimes get carried away thinking they’re being helpful by being challenging on the wrong sorts of things.”

The winner of the MAT or federation category was the Spring Partnership Trust, based in Kent, while Angie Marchant (pictured top of page) from Colham Manor Primary School in Hillingdon took the title of outstanding clerk for her “meticulous organisation skills”.

Nexus MAT in Rotherham won the outstanding vision and strategy category, which looked for a governing board that could demonstrate it had engaged the school community in setting its business objectives.

Warren Carratt, the CEO of an academy chain which only formed in 2016, said Nexus’ business objectives, which include establishing residential provision for complex pupils and sponsoring schools in need of help, were “ambitious”, yet “realistic”.

“We’ve honed a small number of strategic priorities by working really closely with our children, families and school communities to collect information about what’s most important to them and where they feel things can and should be better,” he explained.

Academies minister Lord Nash was in attendance to present the winners with their trophies.

Nominations for next year’s awards will open in 2019 to all schools in England.