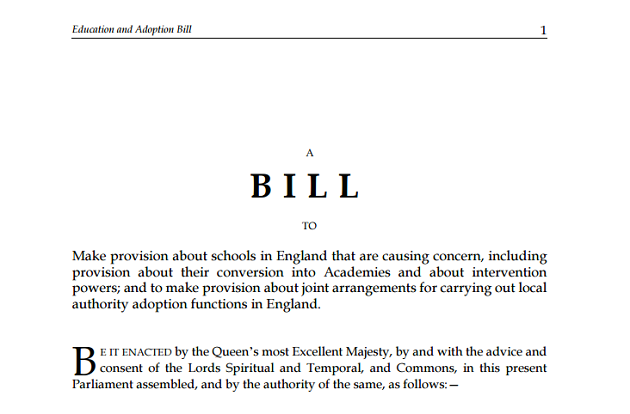 The education and adoption bill passed its final stage in Parliament last night. Here is what each clause of the new legislation means for you and your school.

Clause 1: Schools will be eligible for intervention if found to be “coasting”. The definition of coasting will come later, in a second piece of legislation, and will be subject to a vote by MPs and peers. The label will only apply after a regional schools commissioner informs a school it is coasting.

Clause 2: Regional schools commissioners (RSCs) will have powers to issue schools with a performance, standards or safety warning notice (local authorities already have these). The clause also gets rid of the 15-day period in which schools can currently respond to such a notice and appeal to Ofsted. In future, the issuer of the notice will decide how long the school gets to respond and improve.

Clause 3: Council-maintained schools issued with warning notices over teachers’ pay and conditions will no longer be subject to a 15-day compliance period. The new deadline will be set by the council, but governors will no longer be able to make representations on this matter.

Clause 4: This forces governors of council-maintained schools which are eligible for intervention to cooperate with the RSC, another school or any school improvement agencies.

Clause 5: Education secretaries will now have the power to direct the size and make-up of interim executive boards in schools identified as eligible for intervention. The government will also get to decide the terms of board members’ appointments and the termination of appointments.

Clause 6: Councils must inform the RSC before ordering governors in a maintained school to complete improvement initiatives. They will also need to tell the government before they suspend a delegated budget or appoint more governors. In the opposite direction, councils must also be informed by the government when RSCs are going to intervene. Councils will need permission to intervene in schools where the government has already intervened.

Clause 7: Education secretaries must order the academy conversion for schools rated inadequate by Ofsted. They will also get powers to make academy orders for schools failing to comply with a warning notice or those designated as coasting, but this won’t be a mandatory duty.

Clause 8: There will no longer be a requirement to hold a consultation when the education secretary forces a school to become an academy.

Clause 9: This adds a consultation requirement if the government is forcibly academising a school which already has a foundation behind it, such as a church school (basically, it’s a get-out-of-no-consultation card for religious schools).

Clause 10: Councils and governors will be required to co-operate in the forced academisation of schools designated under clause 8.

Clause 11: The education secretary will be allowed to specify the steps governors are required to take and impose deadlines to enable a forced academy takeover.

Clause 12: The education secretary can revoke an academy order if another potential approach to improvement is identified or closure deemed the best solution.

Clause 13: Introduced by the House of Lords, there is now a mandatory duty on academy trusts and chains due to take over a council-maintained school to communicate their improvement plans to parents.

Clause 14: Another government-proposed addition made in the Lords brings academies under the coasting and failing schools definition. Under this clause, academy funding agreements must include a provision allowing the education secretary to terminate agreements for those academies considered to be coasting.