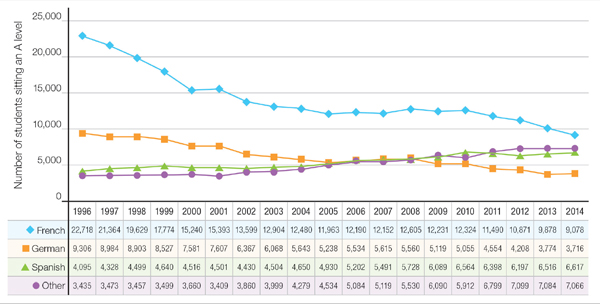 Increased uptake in languages at GCSE following the government’s English Baccalaureate reform is not boosting A-level take-up as expected. Instead, numbers are drastically falling.

Speaking at a Westminster Education Forum event on the future of modern foreign languages, Teresa Tinley, author of the Language Trends Review, published annually by CfBT, said it was “very concerning” that the number of A-level foreign language entrants was dipping.

In 2010, the coalition introduced a school performance measure in which pupils were expected to take a “core” of subjects made up of English, maths, history or geography, sciences and a language.

It was expected that this would increase the number of students taking GCSEs and A-levels in languages.

Ms Tinsley’s research shows that 49 per cent of pupils took a GCSE in either French, German or Spanish last year, up from 40 per cent in 2011.

Ms Tinsley said: “At A-level it’s rather a complex situation. There is, of course, no policy for languages beyond GCSE and the EBacc. There’s a sort of expectation that the EBacc will, in itself, increase numbers post-16, but, in fact, our research shows the situation in post-16 is actually very, very concerning.

“Some of the problems are the negative impact of assessment and performance systems, especially, post-16, and the sense that languages are not appreciated as much as other subjects.”

Concerns were also raised at the event that government plans to make A-levels a two-year linear course, and “de-couple” the AS-level from impacting A-level scores, would also impact languages.

Margaret Kerry, from OCR, said: “We believe that the [reform] of A-levels, if that remains in place after the election, may well result in less take up of languages at A-level.

“As yet, we do not have a clear image of the impact in schools but we do know that the opportunity to take an AS [level] and to make a decision at the end of that AS year as to whether to continue has been, generally, beneficial to languages.”

She said that a survey with the National Union of Students revealed “a very clear message” that pupils would be deterred from taking a subject which they perceived to be hard if they could not take an AS, and then move from there.

“I can’t tell you that will definitely happen to languages, but that is the message we are getting.”

Minority languages, such as Punjabi and Polish, have also increased in recent years though their numbers are still small.

Last week education secretary Nicky Morgan wrote to exam boards outlining concerns that they were seeking to remove A-levels in these languages.

Both Ms Morgan and shadow education secretary Tristram Hunt have said they would work to ensure a future for minority languages.