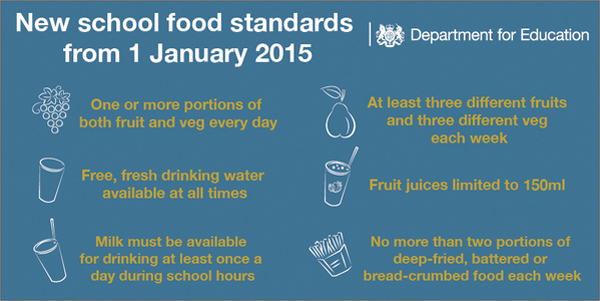 All maintained schools and newly opened academies must follow the latest school food standards from this week – with compliance monitored by the Department for Education (DfE).

The rules simplify existing regulations and include new requirements to offer three different fruits and vegetables each week, and make milk available at least once per day.

The changes are based on the School Food Plan originally devised by the owner of the Leon restaurant chain, Henry Dimbleby.

Myles Bremner, director of the School Food Plan, an organisation set up to support implementation of the standards, said the DfE would be monitoring them.

He said: “A robust survey will be done to validate assessment and food standards, and with caterers. The DfE has committed to such a survey and it will be a really important way to demonstrate the standards are working.”

The Food for Life Partnership (FFLP), a charity led by the Soil Association which promotes healthy eating, says caterers that already have its catering mark will be inspected to make sure they are complying with the new standards.

Almost 8,000 schools are currently accredited by the organisation, which charges a fee for its award. The charity would like to see more support for similar schemes.

“The DfE have suggested they will visit a random sample of schools each year to monitor compliance – this is welcome but we would also like to see the department actively promoting the Food for Life Catering Mark as a best-practice framework for monitoring compliance, alongside the Children’s Food Trust menu-checking service.”

Schools converting to academy status after January 1, and all new free schools, must to comply with the regulations. However, academies and free schools set up between September 2010 and 2014 do not.

The Local Government Association (LGA) is concerned about this “loophole”.

David Simmonds, chairman of the LGA’s children and young people’s board, said: “No school should be exempt from these important standards and we urge the government to make regulations on school food mandatory to ensure every child receives healthy and nutritious food at school.”

A DfE spokesperson said: “We monitor schools to make sure they are doing it and we will do it through surveys. We will let things bed in for a while before we start monitoring properly, in due course.”

If the survey reveals that a school is non-compliant the governing body will be asked to ensure the standards are met, with possible intervention by the education secretary if rules continue being flouted.

The spokesperson added: “We are pleased that many academies that opened between 2010 and 2014, including some of the largest academy chains, have already signed up to the new school food standards, and expect others to do so.”