“I didn’t have a positive experience at school,” admits Debra Rutley, “and I think that has had a massive influence on the teacher and the leader that I am – and is linked probably to the fact that I work in alternative provision.

“I know what it’s like to try and hide things and think that you’re stupid, and have that fear in the pit of your stomach, and think you’re not very bright.”

Even though she heads up a four-site alternative provision academy in Buckinghamshire, Rutley didn’t find out she was dyslexic until she was 32, by which time she’d been teaching theology at secondary schools for over a decade.

As a child, she was caned regularly at her Newcastle junior school for poor spelling. By year 11 her teachers had so little faith in her academic potential, they interrupted her history O-level exam to ask whether she’d like to accept a job interview at the local building society that afternoon, convinced they were doing her a favour. 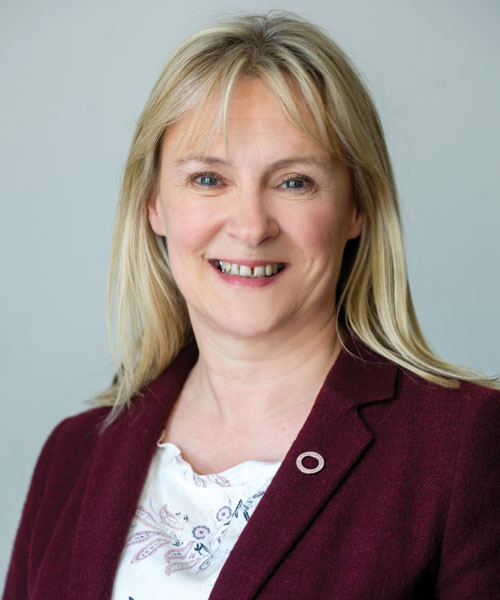 “This is in my exam. During my exam!” she exclaims, the outrage still raw.

“A teacher came in to say: ‘Debra, you won’t get a better offer than this. This is what you need to do’. And I’m like, ‘could you just let me finish my exam?’”

But that loss to customer service is many children’s gain: since 2012, she has led Aspire Alternative Provision, a recently converted PRU with a teaching school and enterprise centre, that has been rated ‘outstanding’ by Ofsted three consecutive times.

“I speak on behalf of the unloved children, the ones that nobody wants,” she says. “The ones that don’t look so great. They might look a bit intimidating and threatening, but they’re children underneath. And I have to be their champion. As one director of education said, I’m a bit arsey on behalf of children.”

I speak on behalf of the unloved children, the ones that nobody wants

She attributes her motivation to her Catholic upbringing. After graduating in theology from Leeds University she originally wanted to work in the Catholic church in Latin America, because it “was really into social justice”.

Instead she went into teaching, then moved into AP 17 years ago – as deputy head of her current school – because those were the kids she had bonded with as a teacher.

“The children who were a bit wobbly in mainstream school would come to my class and sit at the back. ‘Can we just come here, miss, till we sort ourselves out?’ And those children picked me. I didn’t pick them,” she says.

Despite this natural affinity, she was initially terrified. “I thought the kids were going to beat me up! I mean, especially the girls. So I was probably scared stiff in the first six weeks.”

The girls can be especially tough when they arrive, she confides. But her strategy is “killing them with kindness”, while engaging the parents. “We don’t leave it until it gets to a crisis point to get the parents involved.”

Rutley has two children of her own, and their teenage years were not plain sailing.

“Home was harder than work, because it’s personal,” she confides. “But it really helped me empathise with the parents.”

Sometimes they need to come in and have a cry in her office: “Children are hard work, and we’re here to help and we’re not judging.”

Parenting has clearly affected her work in more ways than one. She encourages staff to weigh up their decisions by thinking “would this be good enough for my child?”

With students constantly arriving and leaving, teachers have a vital part to play in their induction, by setting the behaviour norms in every lesson. They are taught certain shortcuts, including a bank of shared phrases, such as “make the right decision”, “you’re better than this” and “make a fresh start”. After a while the students appropriate the language and start to use it themselves. “And that’s what it’s about – changing habits.”

The importance of habits is one of those themes that returns throughout the day.

At one point as she’s posing for photos, Rutley adopts a powerful stance.

“I am the behaviour policy,” she says, running her hand from head to toe with a flourish. By this she means that how staff and students treat each other every day, or their “behaviour culture”, is more important than a written policy, a concept she illustrates with a phrase used by education writer Mary Myatt: “Lived, not laminated.”

Later in the office, in a Geordie lilt that’s still distinctive after 30 years down south, she explains her approach to unnecessary workload: “You make it a habit, then you don’t have to make it a paperwork trail”.

Pupils do academic lessons, such as English and maths, at The Wycombe Grange, a formal mayoral house which is “entirely inappropriate for a school”.

It has narrow winding corridors, science “labs” – with a couple of Bunsen burners apiece – in what seem like converted sheds, and a small grass patch at the back that serves as a five-a-side football pitch. One cook prepares three daily lunch options for 60 people from a house-sized kitchen, preparing everything from fresh as there’s no room for freezers. Three classrooms serve as dining rooms, and everyone eats together.

PE is done off-site – they’ve invested in people carriers which carry six students at a time.

Vocational lessons such as mechanics, construction or catering are delivered at the Chiltern Skills and Enterprise Centre 11 miles away. Mercifully, it’s a purpose-built educational facility and so has a mechanics workshop (and a proper kitchen).

Local schools used to send struggling students for vocational training one day a week. “That doesn’t happen anymore,” observes Rutley. “I think that’s to do with Progress 8 and things like that. And also the financial constraints in a mainstream school, as much as possible they want to hold on to their own.”

Her response to local authority cuts has been to upskill her staff, since support services such as educational psychologists have now disappeared entirely.

Rutley’s own dyslexia diagnosis was “a massive shock to the system” she recalls. For all the years she’d been teaching, she had found creative ways to avoid ever writing on the board.

Her colleagues weren’t all supportive, and one department head told her that he wouldn’t want her teaching his child.

But years of low expectations from her own teachers had produced resilience: “It didn’t crush me. It was like, ‘I’m just going to work really hard’.”

With the support of the school’s SEN teacher she even transitioned from teaching theology to top-set GCSE English. “Honest to God, I went home crying my eyes out,” she says, recalling the day she was assigned that class. “I was petrified of not being able to pronounce the words properly or be spelling things wrong, and having these long essays to mark.”

Rutley is keen to emphasise that her school puts as much emphasis on teaching and learning as behaviour. In fact, she says, the teachers have to be excellent to get them through their GCSEs, as most arrive with “shockingly low levels of literacy”.

There seems to be a consensus in the education community that pupil referral units can teach mainstream schools about behaviour management, but that PRUs need to look back at the mainstream for examples of great teaching and learning.

“I agree that’s the narrative”, says Rutley, choosing her words carefully, “but that’s not our experience.

“We’ve got a whole heap of really good specialist leaders of education with the teaching school, who can do both.” 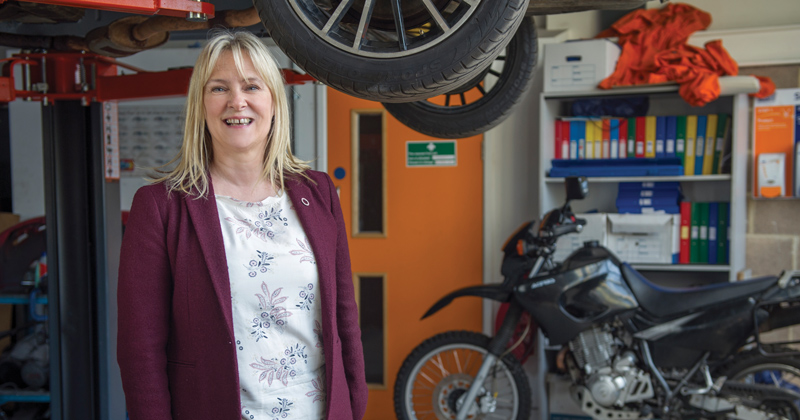 Their sports coaches tend to be semi-professional athletes, who can model healthy lifestyles.

When one coach scored the winning goal for Chesham United in an FA Cup game in 2015, “he was plastered all over the papers, and that was absolutely fabulous. Fabulous for our kids.”

While the working day is relatively short, staff are on duty full-time from 8:45 to 3pm without a lunch break.

“They have lunch, but they have it with children,” she says. “A couple of years ago the unions found out about this, and they came in to see me, and challenged me and said I was breaking all the rules. So I said “’talk to members of your union and see what they say,’ and they all basically said ‘bugger off’.”

Wednesday is a half-day for students, so staff from across the four sites can come together for meetings and CPD.

On the other days, staff participate in a daily debrief after the students leave, where they all have “a bit of an offload, so you don’t take it home”.

They also share the things they’re grateful for and if one of the students is nominated as a “blessing”, they get a phone call home. Given that the typical parent of a child in AP will be used to negative feedback, “to get a phone call that says ‘so and so was mentioned in staff briefing today and is one of our blessings of the day’, that’s a lovely thing,” she explains.

As I wait to hand in my badge, a student who’s remembered my name all day strikes up a conversation. I ask what he thinks of the school. “It’s nothing like what the teachers at my old school said,” he says, animatedly. “They’d say ‘you don’t want to go to the Grange’ like it was a prison or something.”

But it’s not like that at all, he insists.

His enthusiasm puts me in mind of something Rutley told me earlier about her own school experience: “The school culture that I grew up in was based on fear, and if there’s one thing that I would like to do with the education system, is to take the fear out of it.”

If you could put a motto on a billboard, what would it be?

Probably “have the courage to live the life you want”.

What is a good gift for you?

Probably a book, always a book. If not a book, an activity. Something to do – because I can’t stop doing stuff!

What would be your escape fantasy?

I’d like to go back to Australia to see my friends and have barbecues and play cards. People have moved to different places now, but where I worked [as a teacher for a year on an exchange programme] was in Cairns, in the tropics – which was a bit of an experience.

I like ski holidays, because you’re doing something that’s really quite hard that switches off your brain from work. That’s what I need. And my boys are really, really good skiers and they force me to do things out of my comfort zone. So it’s like, “feel the fear and just go with it”.

What was your position in the family growing up?

There were five of us. I’m the oldest. I was the bossy one