The proportion of pupils attending school rose to 2.4 per cent in the middle of last week, new figures show.

Weekly attendance figures published by the government show there were 223,000 pupils in England’s schools last Wednesday (May 6), up from 197,000 (2.1 per cent) at the same point the week before.

The data also shows that the proportion of establishments open reached 81 per cent last week, the highest seen since March 27, at the end of the first week of partial closures.

Schools have been closed to all but the most vulnerable pupils and the children of key workers since March 20, and attendance numbers dropped substantially from 3.7 per cent on March 23, the first day of partial closures, to a low of 0.9 per cent during the Easter holidays.

The low attendance figures, particularly among vulnerable pupils with support needs, have prompted concern about whether pupils are getting the right help.

Following the overall rise in attendance, the government now estimates that around 14 per cent of children classed as “vulnerable” attended school last Thursday, up from 12 per cent on April 30.

The proportion of children of key workers has also risen in that period, the government said, from 4 per cent to 5 per cent.

The number of teaching staff attending also rose to a high of 111,000 last Wednesday, the highest level since March 26. 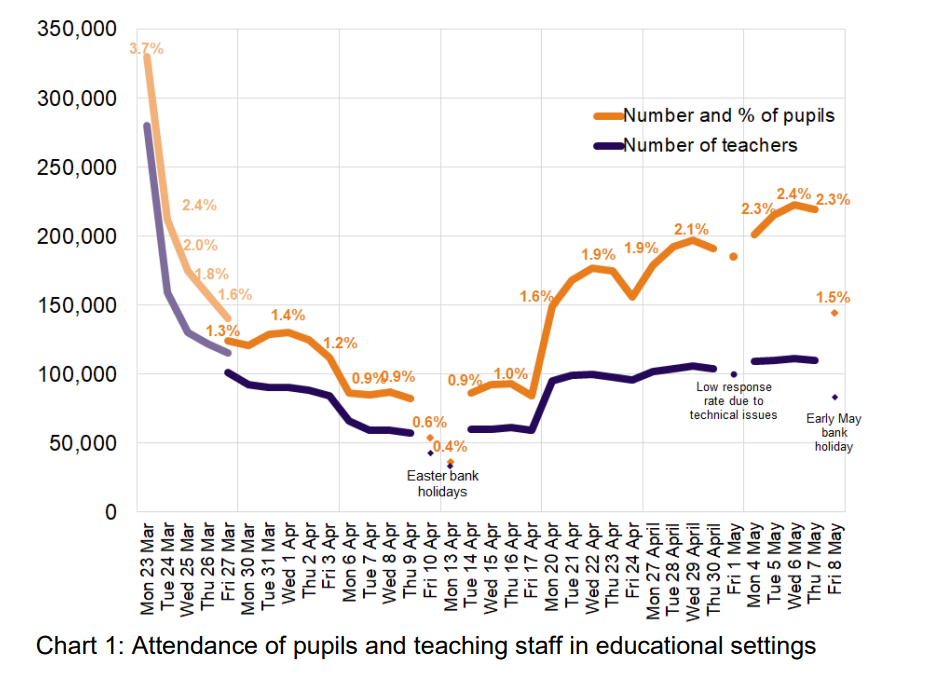 It comes after the government told schools and local authorities to urge more vulnerable pupils to attend school.

The government’s recovery strategy, published yesterday, acknowledged that low numbers of “vulnerable” children, who are allowed to attend school now, are doing so, and states that local authorities and schools should “urge more children who would benefit from attending in person to do so”.