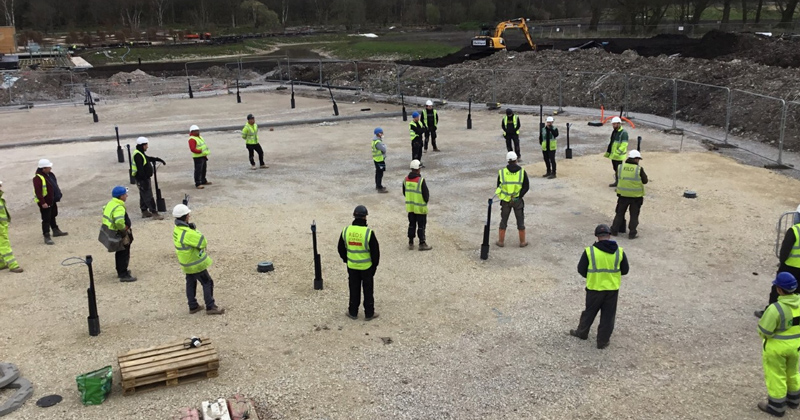 New schools due to open this September are facing delays as construction is suspended or delayed as a result of the coronavirus pandemic.

The setback comes as secondaries scramble to deal with a population bulge following an early-2000s baby boom.

Data from the Department for Education recently revealed 17 per cent of secondary schools were full or over-capacity last year – up from 15 per cent in 2017.

Unity Howard, the director of the New Schools Network, said new schools were “critical to the national infrastructure and, after healthcare, must remain a key focus of the government during this time”.

“The last thing schools need is an influx of families that cannot find a school place … because the free school they were promised was not built.”

Under the government’s guidance, construction work “can continue if done in accordance with the social distancing guidelines wherever possible”.

In Norfolk, the construction of three new schools – Hethersett Woodside primary, Trowse primary and St Edmund primary – have been halted as the county council “temporarily” suspended building work on school sites. All three were due to open in September.

John Fisher, the council’s cabinet minister for children’s services, said the suspension was “to keep both construction workers and the wider community safe”.

“We won’t know the impact until we know how long the current restrictions are in place, but would like to assure parents that every child in Norfolk will have a school place in September.”

In Newbury, the opening of the new Highwood Copse primary has been pushed back to 2021.

In Newcastle, building work on extra classrooms at Gosforth Academy was initially halted, but resumed this week to help deal with the rising number of secondary pupils in the city. The construction company is hoping to finish by September.

However, a contingency plan agreed by Newcastle council and Gosforth Multi-Academy Trust “involves the temporary use of classroom space within existing academy buildings”.

Howard said that construction on new schools should be restarted “as an urgent priority, as soon as the scientific evidence shows it is safe for them to do so”.

But BAM Construct, which is building about 15 schools across the UK, said the pandemic meant “a significant number of new measures had to be introduced”.

At most sites it was “operating at around two thirds of capacity or better”, depending on the stage of the project. In some cases sites with about 500 workers now had just over 100.

Some supply chains also had been disrupted, but the company was in regular contact with the DfE to “work with it closely” on handover and potential opening dates.

A spokesperson added: “In the majority of cases we believe we are able to keep programmes broadly on track and delays to a minimum. But this is a fluid situation and our role is dependent on a lot of factors some are not fully in our control.”