More than two in five A-level pupils believe the assessment system in place this year will adversely affect their grades, while almost half believe the Covid-19 crisis will hit their chances of getting into their first-choice university.

Social mobility charity The Sutton Trust polled pupils studying for their A-levels this year, and found many were worried about the impact of the pandemic on their progression. It also found a large divide between pupils depending on their socio-economic background.

1. More than 2 in 5 think new system will tank grades

This year, A-level grades will be issued by schools themselves based on a number of factors, and then moderated by exam boards. You can read more about that here.

In response to the Sutton Trust survey, 43 per cent of pupils said they felt the new assessment system would have a negative effect on their grades.

Seventy-two per cent felt the new system was less fair than in a normal year. 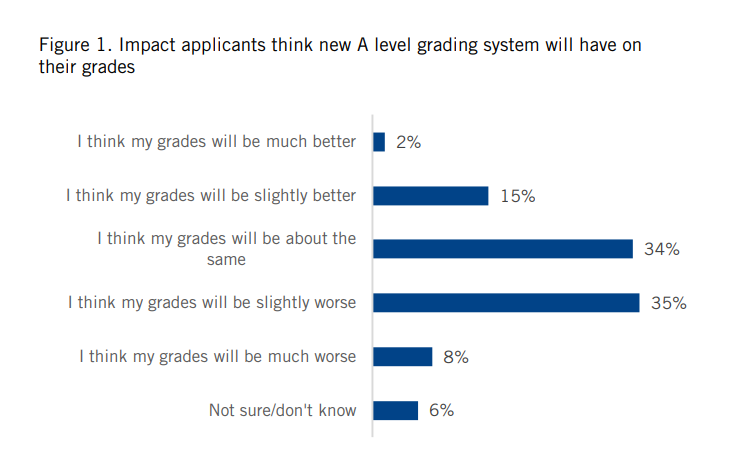 2. Applicants face ‘gap in support’ as schools tackle other challenges

Although 68 per cent of pupils expressed satisfaction with support for their learning, the proportion who were happy with the support they received with the university application process was lower (57 per cent).

Overall, 35 per cent of respondents said they were not satisfied with the support they received with university applications.

According to the report, this suggests “there may be a gap in support for applicants at this time, as schools try to cope with unprecedented challenges and focus on other issues”.

Under new plans revealed this morning, students will now be able to access a new ‘enhanced’ clearing portal that the government hopes will make navigating admissions easier for youngsters.

3. More than half would take autumn re-sit

The government has said that pupils who don’t feel their grades accurately reflect their performance can take exams in the autumn.

Fifty-two per cent of pupils surveyed by the Sutton Trust said they would be likely to take an autumn exam if they don’t get the grades they hoped for.

4. A fifth change their mind about university

Of those polled, 19 per cent said they had changed their mind about university attendance this autumn or had yet to decide.

Of those who have changed plans in light of the Covid-19 crisis, “some are now planning to take gap years, while others have changed their preferred university”.

Working class pupils are more likely to have changed their mind.

5. Half predict a negative impact

Asked about the overall impact of Covid-19 on university admissions, 48 per cent of pupils said they felt the crisis would have an impact on their chances of getting into their first-choice university, while 31 per cent said there would be no impact.

Working-class pupils were more likely to be worried (51 per cent) than those from middle class homes (43 per cent).

However the poll was before new government measures, announced today, which aim to stabilise admissions.

The Sutton Trust’s research found that pupils from working class backgrounds were twice as likely to have insufficient access to internet access, devices for learning or a suitable place to study, compared to those from middle class homes. 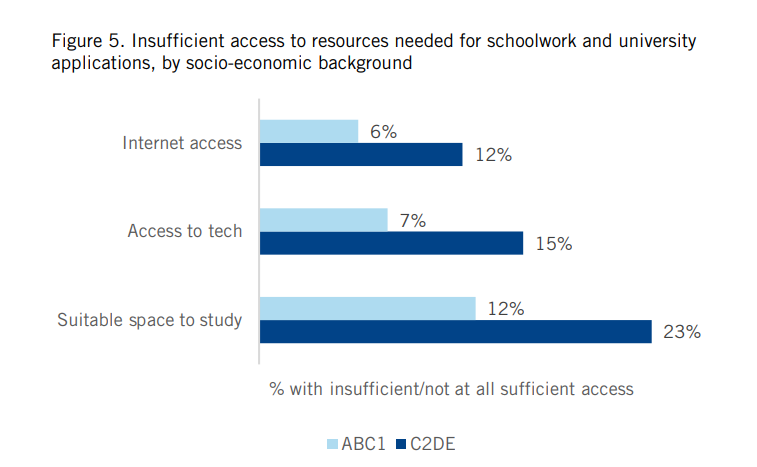 It also found that private schools were almost twice as likely to be continuing to teach A-level content (57 per cent) as state schools (30 per cent).