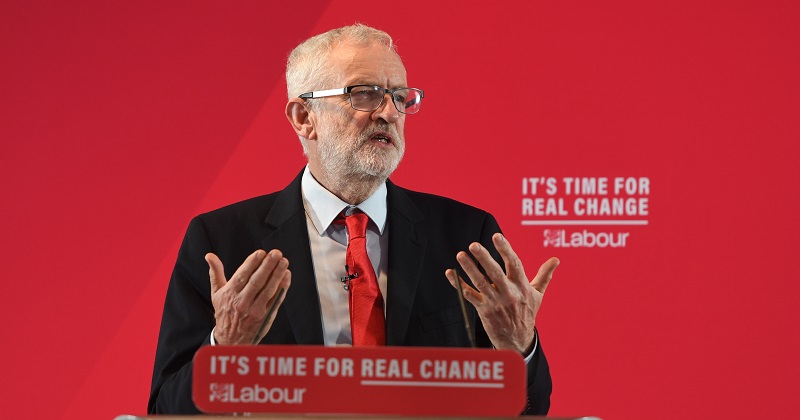 Teachers are being forced to buy “uniforms and even mattresses” for pupils because their parents cannot afford them, Jeremy Corbyn has warned.

The Labour leader told activists in a speech today that it made him “angry” that schools are having to close early on Fridays, and said he had heard from teachers that pupils could not concentrate in class because they are so hungry.

He said the Conservatives should apologise to “every child who has had their education damaged” as a result of their policies.

But Gavin Williamson, the education secretary, accused Labour of opposing “all we’ve done to drive school standards and discipline”.

Corbyn’s speech did not reveal any new schools policies, but comes after Labour pledged £845,000 to help pupils with mental health problems, including access to mental health professionals for primary schools.

Speaking at Blackpool Football Club alongside shadow education secretary Angela Rayner, Corbyn said despite claims about funding from the Conservatives, schools on the ground are struggling.

“Whatever statistics Conservative politicians bring out, if you’re a parent or a grandparent, you’ll know the real story,” he said.

“Teachers are spending more and more time filling the gaps left by cuts to other services and not spending enough time teaching. They’re having to buy uniforms and even mattresses for pupils whose parents cannot afford them.”

Corbyn said he had met teachers who reported pupils unable to concentrate in lessons “due to the hunger that they have when they come into school in the morning”.

A survey by the NASUWT teaching union in April found that teachers are increasingly dipping into their own pocket to provide basic classroom resources and essentials for pupils.

Three-quarters of those surveyed said they bought food, 29 per cent toiletries, and a quarter clothing or shoes.

Analysis by the Institute for Fiscal studies published in September found that Boris Johnson’s plan to increase the schools budget by £7.1 billion by 2022 amounts to a 7.4 per cent growth in funding, just short of the 8 per cent real-terms cuts faced by schools over the best part of a decade.

Corbyn said the Conservatives “want you to be grateful for their offer to reverse some of the cuts made to our schools”.

“The money they say they’ll put in doesn’t even cover the money they’ve taken out,” he warned. “But their feeble promise is an admission that their cuts are damaging and wrong. So are they going to apologise to all the children who have missed out since 2010? Children only have one chance, they only have one childhood.

“Are they going to apologise to every child who has had their education damaged because of the cruel political choices made by the Conservatives in 2010? They would if they cared as much about our country’s children as much as they care about their rich friends.”

Labour is yet to provide its own updated funding pledge, but is expected to go further than it did in 2017.

Williamson also repeated his often-used claim that 1.9 million more children are in ‘good’ and ‘outstanding’ schools than in 2010 – a statistic that has been branded misleading by the UK Statistics Authority.

Labour’s pledge of hundreds of millions of pounds to provide mental health support for children will include provision for schools.

The proposal builds on Labour’s pledge in 2017 to introduce a trained counsellor in every secondary school.

On top of that policy, Labour’s healthy young minds fund will give primary schools access to qualified experts at least once a week.

Labour will also set up drop-in mental health hubs in every local authority area to help 300,000 children, the party said.