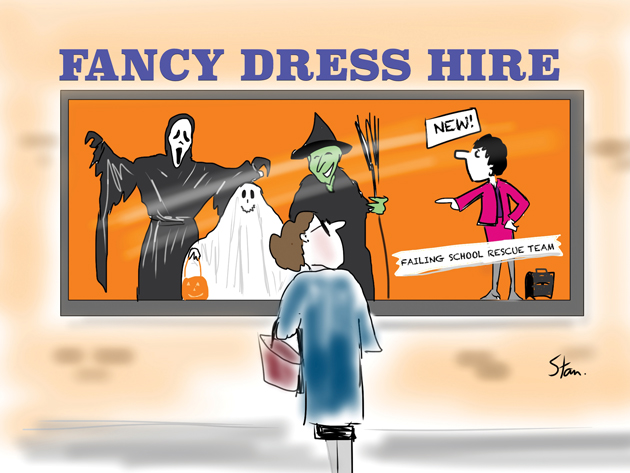 A rescue team of teachers in the shape of a National Teaching Service (NTS) were proposed this week by Prime Minister David Cameron.

The new centrally funded body would be made up of high-quality teachers who could be deployed where they were most needed.

The teachers would be employed by the service, rather than individual schools, and could be sent to under-performing schools anywhere in England.

Mr Cameron wants 1,500 teachers in the NTS by 2020, making enough to place two teachers in every failing school in England.

NTS members would receive a ‘National Teaching Fellowship’ financial supplement on top of their salary on the condition they taught in a “failing or coasting school” for anything from two terms to two years.

Sir Michael Wilshaw called then for a team of ‘good teachers’ to be deployed in rural and more remote places to challenge complacency and poor standards in those areas. Teachers were to be offered incentives, such as bigger pay packets, higher status and faster career progression.

Around the world there are similar examples of deploying teachers elsewhere. For example, Australia run a scheme called ‘The Remote Teaching Service’.

It is made up of a group of more than 200 teachers living and working in 38 remote communities in Western Australia.

France also have system whereby a secondary school teacher could be transferred anywhere in the country throughout their working career.

The announcement from the Tory leader regarding a National Teaching Service in England has however been met with concerns from members of Voice the Union.

General Secretary, Deborah Lawson said: “It can take considerable time to turn a school around, depending on the nature of problems, and we do not want to see outstanding teachers taken out of good schools to help in others, only to be sacked for failing to ‘deliver’ in an unfeasibly short time scale.”

Teach First, a scheme that already recruits high-achieving graduates to teach in challenging schools predominantly in urban areas, has welcomed the proposal.

Brett Wigdortz Founder and CEO, said: “We welcome today’s announcement and any scheme that seeks to attract and support talented teachers to those classrooms that will most benefit, whilst developing teachers’ leadership potential.”

Detailed plans of the proposed NTS will be contained in the Conservative party manifesto.