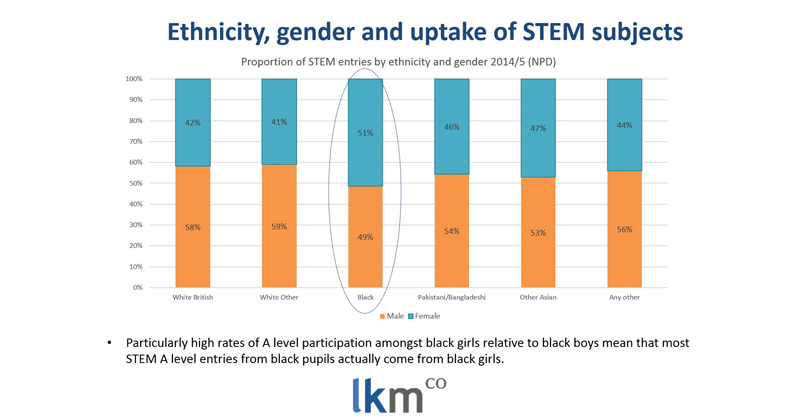 The finding comes from further analysis by think tank LKMco of a report they co-authored with Education Datalab for the Social Mobility Commission last month.

When it looked at the different uptake of A-levels in maths, biology, chemistry and physics among ethnic groups, it found that most (51 per cent) black pupils taking the subjects were girls.

Among all other ethnic groups, more boys took the subjects, with “white other” girls having the lowest take-up (41 per cent) of STEM courses.

Loic Menzies, director of LKMco, said that while a higher proportion of STEM entries from black students were girls, they nevertheless picked the subjects at a lower rate than black boys overall. Of all black girls studying A-levels, only 12 per cent took STEM, whereas among all black boys it was 15 per cent.

But black girls outnumbered boys in the study because so many more go on to study A-levels compared with their male peers.

While it was controversial, Generating Genius was debating opening “boys’ only” programmes to improve the academic results of black boys

Tony Sewell, founder and director of Generating Genius, an organisation that supports pupils from disadvantaged backgrounds to take on STEM careers, said there was “obviously an issue” with black boys taking STEM A-levels, but “too many” of the black girls from the data would pursue “medical science careers”.

He told Schools Week: “The figures disguise the fact that too many of those girls are going for the medical sciences. In other words, the softer sciences. These are not engineers, physicists or chemical engineers, these are for medical and biology careers and so on.

“Even though I am happy that girls in this group are doing STEM, it is what sort of STEM they do.

“Black boys are obviously an issue here, and the findings do reflect the general situation we have on campuses. They are collapsing in the school space somewhere.”

Sewell added that the finding backs up the structure of his own organisation in which 60 per cent of high achievers were now female.

He said while it was controversial, Generating Genius was debating opening “boys’ only” programmes to put a “key focus” on improving the academic results of black boys.

The analysis also found that poorer pupils took fewer STEM subjects, particularly if they were white British or black.

Menzies said the finding showed that disadvantaged pupils from different ethnic groups “see a completely different role to science in terms of their future.

“We need to understand why among some ethnic groups science is seen as something as a valuable thing to pursue, whereas it is not seen as the case for others.”

Menzies said policymakers should use the research to look at and tackle assumptions across all subjects while recognising “cultural dimensions”.

“The intersection of ethnicity and gender and poverty matters too,” he said.