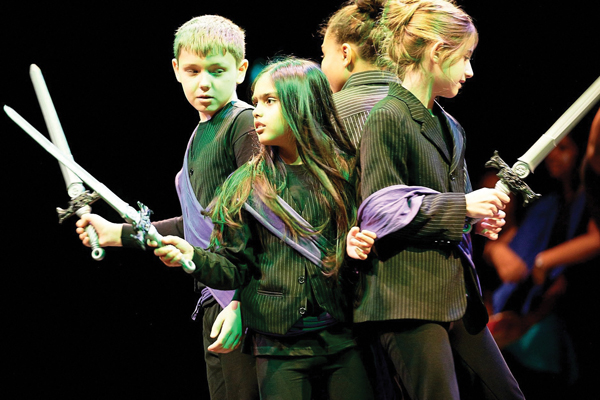 Students from 12 Ark schools have traded their ballpoint pens for quills over the past few months as they’ve taken part in the annual Shakespeare Schools Festival, the UK’s largest youth drama festival.

Children learned lines, designed sets and even practised their sword-fighting in the lead-up to performances that culminated in three nights on stage at the Shaw Theatre, Euston, the Arts Depot Theatre, North Finchley and the Secombe Theatre, Sutton.

Audiences watched interpretations of plays including Romeo and Juliet, Hamlet, The Tempest, Julius Caesar and A Comedy of Errors.

A few weeks before the final performances, pupils came together at Ark All Saints Academy in south London to take part in workshops led by Shakespeare Schools Festival to help the casts to perfect and practise their performances.

“It’s helped me to develop a much better understanding of the play along with how to develop my character through being focused and enjoying the process.” said Ella Clarke, a member of the Ark Academy, London cast who performed The Tempest.

“We have loved performing on different stages and venues and being part of a company of friends,” added Alice Jenner, from Helenswood Academy in Hastings, who performed Two Gentlemen of Verona. “It’s been really valuable to watch other schools perform and compare what we’re doing to help improve our skills.”

A total of 261 Ark students took part in the festival, which works with more than 1,000 schools to give pupils the opportunity to perform on a professional stage in front of an audience. Kate Claxton, head of drama at Charter Academy, Portsmouth, said: “The students find it so valuable to work collaboratively with other year groups in their own school but also to work with other schools on production day.

“It’s an amazing way to introduce the pupils to Shakespeare; not only their own play but also by seeing all the other plays produced on the night by fellow Ark schools.”

Lucy Monk, Helenswood’s principal, said: “The cast, crew and directors did a terrific job. The play was new to most of the audience but the girls managed to make it a fast, witty and clear performance.

“A great piece of physical theatre, the girls relished the opportunity to perform in a professional venue as part of the festival.”

All the academies plan to be back for next year’s festival.