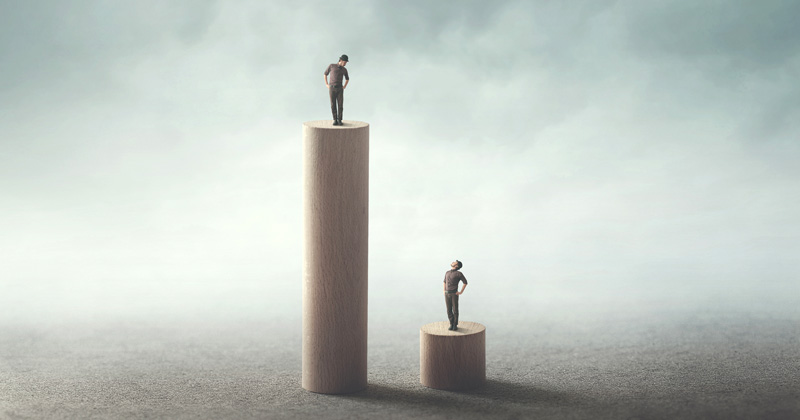 As the Education Policy Insitute publishes its annual report on the state of education in England, Jo Huchinson says ‘levelling up’ simply can’t wait any longer

Cast your minds back to summer 2019, before the spectres of the pandemic, school closures and algorithmic exam results loomed into view. All the certainties about school results season have been shattered this summer, and there are widespread fears of rising inequality due to the diverse schooling and home experiences of children during lockdown.

But the shadow of disadvantage had already gathered and intensified over the last three years and by 2019 there could be no further doubt that educational gaps had stopped closing.

Two years ago, we started to take a detailed look at the speed at which the disadvantage gap – the gap in school attainment between poorer pupils and the rest – was closing.

At that stage, the gap was slowly reducing, but we were concerned that this was masking a loss of momentum in closing the gap, because the size of these reductions was small and difficult to grasp. So we introduced an annual projection of how long the gap would take to close completely, based on the latest trends.

Our concerns increased with each successive report: the time at which the gap would close rapidly spiralled from 80 years, to over 100 years, to more than 500 years. But for this year’s report, published today, we have now reached a new stage: because the disadvantage gap at GCSE has stayed the same after five years, we can now no longer even say when it will close.

What we can say is that a substantial contribution to this disturbing projection was made by rising persistence of poverty among disadvantaged children. The average proportion of a pupil’s school life spent eligible for free school meals has increased for the last four consecutive years, and the proportion of disadvantaged children with at least 80 per cent of their school life in poverty has increased by 5 per cent since 2015.

The school system has been unable to fully compensate for this rising tide of deprivation. The choice is to either reduce poverty or to redesign the system for an increasingly traumatised and debilitated child population. Two years of warnings have gone unheeded and that is how we came to enter the pandemic in such a predicament.

I wish this were the worst we had to report but every stone turned has something disquieting beneath. Looking at different groups of pupils, our research finds that gaps have continued to widen for children of ‘black Caribbean’ or ‘black other’ heritage. These have increased by around two-thirds (to 11 months) and over three-quarters (to 7 months) in the last decade.

For children with English as an additional language who arrived late in their schooling the gap has increased by 11 per cent (to 21 months) in the latest two years. These gaps compare with 18 months for all disadvantaged children and 23 months for the most persistently disadvantaged.

Turning to children with special educational needs and disabilities, the gaps stand at two years (24 months) for children recorded with ‘school support’ and over three years (41 months) for those with an education health and care plan. It’s difficult to disentangle the trend for these groups because SEND reforms in 2014 changed the process of assessment and reduced the number of children receiving school support, but progress in closing the gap has almost halved since 2015 for children with school support and shifted from ‘slow’ to ‘zero’ for education health and care plans.

For the first time, we have also produced gap trends for children in contact with social care and discovered large gaps and uncertain progress.

The gap at GCSE is 20 months for children with a social worker but no protection plan, 26 months for those with a protection plan, and 29 months for those living in care. The least progress has been made for looked after children, who receive the most intervention and funding through the pupil premium plus. Progress for children with protection plans is hard to gauge because the group is growing and becoming less (though still substantially) economically disadvantaged. This group does not receive any nationally consistent educational support despite having a larger gap than persistently disadvantaged children. This needs to change.

In light of these realities the government must now acknowledge the extent of adversity and inequality of childhood in England and design its responses to meet the needs of the majority of children – for it is the majority that have some additional need or other, whether through poverty, disability, trauma or ethnicity.

We do not live in some imagined land of ease and plenty and we must stop governing by soundbite and scattered crumbs of funding. Children’s lives are being dragged down, not levelled up.