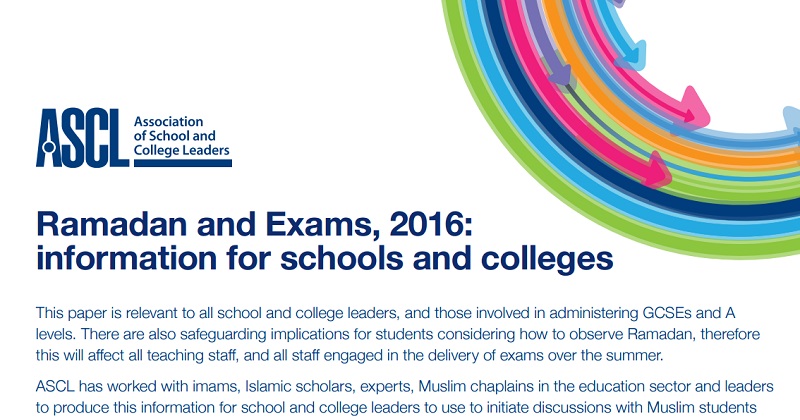 School pupils fasting for Ramadan should have access to quiet resting space, cooler classrooms and room for prayer near exam halls, according to union advice that has been backed by Muslim leaders as heads prepare to oversee the first exam period to clash with the celebration since the 1980s.

This year will be the first time Ramadan has fallen during the summer exam period for several decades, and the Association of School and College Leaders has issued guidance for schools on how best to accommodate pupils who are fasting, and could therefore be affected by tiredness or dehydration between June 6 and July 5.

The document, released by the union today, has been put together in consultation with a large number of representatives of the Muslim community in Britain, including Imams, academics and religious education leaders, along with exams officers and other prominent educationalists.

Although the exam timetable for this year has already been slightly amended to move some large-entry exams to morning sessions to move others to before half term – a matter of some controversy which sparked a widespread debate when reported by Schools Week in January – many schools will still be responsible for the well-being large numbers of pupils who are not permitted to eat during the day.

Although fasting during Ramadan, which includes drinking no water, is one of the fundamental religious duties or ‘five pillars’ of Islam, the teachings of the religion also say that education is a “religious and moral duty”, and teachers are being urged to make sure pupils don’t have to choose between the two.

School staff are being advised to keep pupils informed of “allowances” within Islam for breaks from their fasting “if they feel it will in any way jeopardise their performance”, and should provide a supervised, quiet space to rest between exams for those who are avoiding school canteens.

Revision lessons should be run in cooler classrooms during hot weather, the guidance states, and pupils should be consulted on whether revision sessions should take place in the morning or afternoon. Fasting pupils entitled to free school meals should still be given their allocation, but in a form they can take home at the end of the day.

Schools should also consider exemptions from PE for fasting pupils, and should consider the impact of the timetabling of sports day events, school trips and celebrations, the document said.

Specific advice for exams staff advises them against suggesting pupils have a “sip of water” unless there is genuine concern they are suffering from dehydration. Instead, exam halls should be shaded, with fans and water provided and a place for pupils to pray nearby.

For those feeling dehydrated or experiencing symptoms such as headaches or drowsiness, exams staff are advised to tell pupils to stop fasting by drinking water, reassuring them they can make up the fast under Islamic rules.

Khola Hasan, a member of the Islamic Sharia Council, was one of those consulted on the guidance.

He said many Muslim students were able to keep the long summer fasts as well as revise and sit exams, but the document offered options “in accordance with Islamic guidelines” to those who think their performance may be affected.

“The Islamic tradition has an established history of discussion, debate and reasoning,” he added. “There are many concessions for hardship in observing religious commandments.”

Shaykh Ibrahim Mogra, assistant secretary general of the Muslim Council of Britain, who was also a consultee, said: “Contributors to this paper have offered sound and useful advice for schools and colleges in supporting their Muslim pupils during exams.”