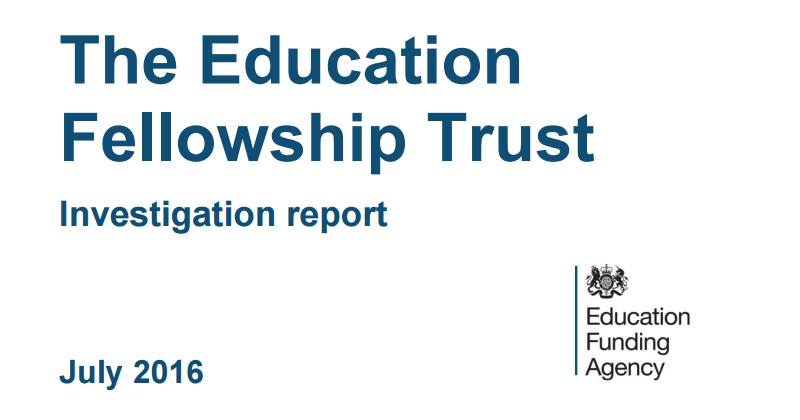 An academy trust has been ordered to close a linked commercial company and “closely monitor” its finances following an investigation by the Education Funding Agency, its second in the space of three years.

The Education Fellowship Trust has been warned that its current organisational model is “not acceptable” and does not confirm to model articles of association for multi-academy trusts or provide assurance that resources were managed “in an effective and proper manner”.

It follows an earlier investigation of the trust by the EFA in 2014, which highlighted concerns over governors’ expenses of £45,000, a fact-finding trip to New York and unadvertised jobs that went to family members. A financial notice to improve issued to the trust at the time was lifted last April, but the organisation is now subject to a new notice following the latest probe.

The trust was also rapped by Ofsted last year after inspectors found “no clear record of improvement” across its 12 schools in Northamptonshire, Wiltshire and Berkshire, and was singled out in government league tables as one of the worst-performing trusts in terms of progress and attainment of pupils at key stage 2.

The EFA’s latest investigation focused on the structure of the trust and its relationship with The Education Fellowship Limited, the chain’s private limited company owner, whose directors are the trust’s chief executive Johnson Kane, chief operating officer Lizzie Rowe and its chair Ralph Townsend.

The probe established that the limited company was not currently active and did not receive income or benefit from the trust, but that there was a possibility that the structure “could be used to benefit the directors”.

“There was no evidence of transactions with the limited company TEFL,” the EFA said.

“Although the Trust has shown willingness to simplify the existing structures and arrangements, the current organisational model is not acceptable and does not conform to the latest model articles of association required for multi-academy trusts.

We question the use of public funds for this investigation

The report said the trust “fails to provide assurance to the secretary of state that resources are managed in an effective and proper manner” and must now be brought in line with other multi-academy trust structures.

But Lizzie Rowe, chief operating officer at The Education Fellowship, insisted the trust’s structures had been approved by the DfE in both 2012 and 2014, and questioned the “use of public funds for this investigation”.

“Before this investigation was carried out in May the trust was already undertaking steps to ensure their structure and governance were best suited to serve its academies and communities.

“The trust is content with the conclusions and the majority of the recommendations have already been processed and implemented. The trustee board has expanded and non-effective trustees have stepped down.”

However the trust has also been warned about its financial position after officials discovered that although a balanced budget was set across the trust as a whole, a number of its academies were operating in-year deficits totalling £344,000, which the EFA said was putting pressure on its free reserves, which totalled £1.1 million as of August last year but were now “reducing at an unsustainable rate”.

It concluded that some of its financial problems were down to a high proportion of spending on teaching costs and a higher-than-normal top-slice by the trust itself, but claimed the chief executive was confident that savings plans and revised projections based on rising pupil numbers would “rectify this situation over the coming years”.

The trust must now change its legal and governance framework, review its spending and develop a longer term financial forecast for a three-to-five year period, “including recovery plans for individual academies and projected pupils on roll at academy level”.

It has also been told to appoint more independent trustees to its board, which it said should closely monitor the trust’s latest financial projections and receive regular updates on all major procurement spends.