Ministers have named and shamed 43 academy trusts that were late submitting financial returns in the last academic year.

The number of chains named and shamed by the government has more than halved since last year, when 88 were listed.

Trusts were included if they failed to submit one or more of their required financial returns on time. These included annual accounts, financial statements, their budget forecast return outturn, three-year budget forecast and land and building collections tool submissions.

Although most of the trusts listed were only late with two submissions, some missed the deadline for three or four.

Gilsland Church of England Primary School was late with its financial statements, annual return and three-year forecast, while Ludlow Junior School and The Aylesbury Vale Academy both missed the deadline for their land and buildings collection responses, along with their accounts and statements.

Notable names on the list include the Astrea Academy Trust, which had to delay publishing its accounts after bringing in auditors to look into “question marks” over its expansion to take on struggling schools.

Hadlow Rural Community School is also on the list. The school is on the site of Hadlow College, which in May became the first college in the country to go into education administration.

The list only names and shames organisations in the academies sector that submitted financial information late, but the government wants to see local authority-maintained schools subject to similar reporting requirements in future years.

In a consultation launched in July, the Department for Education said it also wanted LA-maintained schools to obtain permission for related-party transactions from their councils and declare any school staff paid over £100,000 a year.

Named and shamed: The trusts that missed financial reporting deadlines 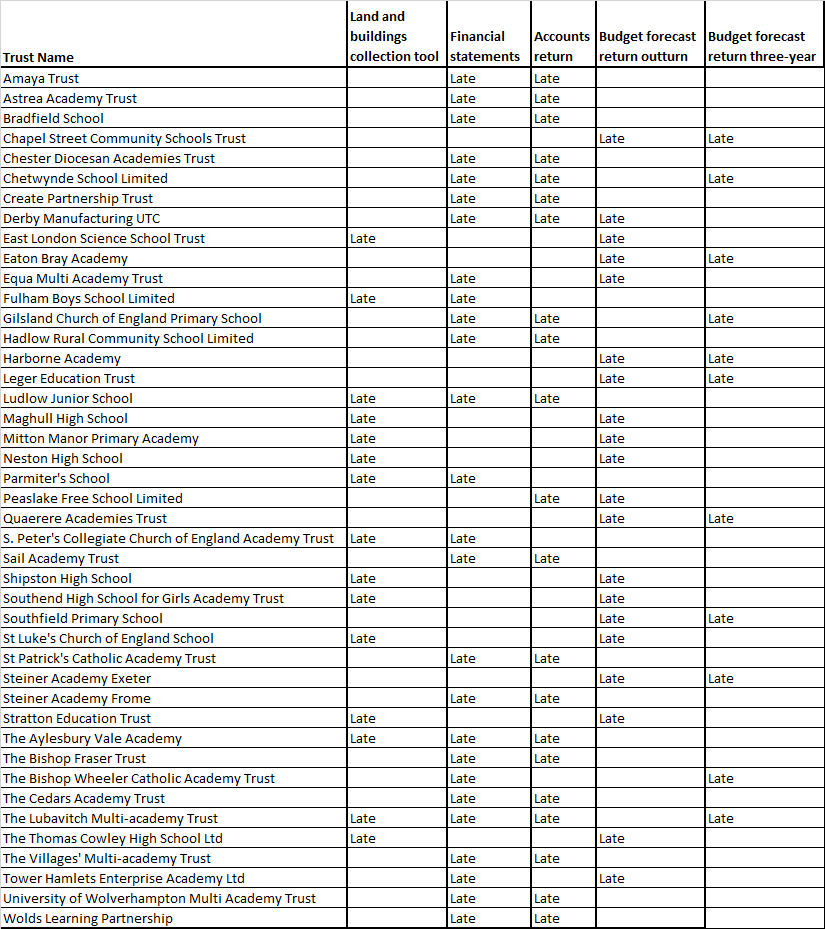