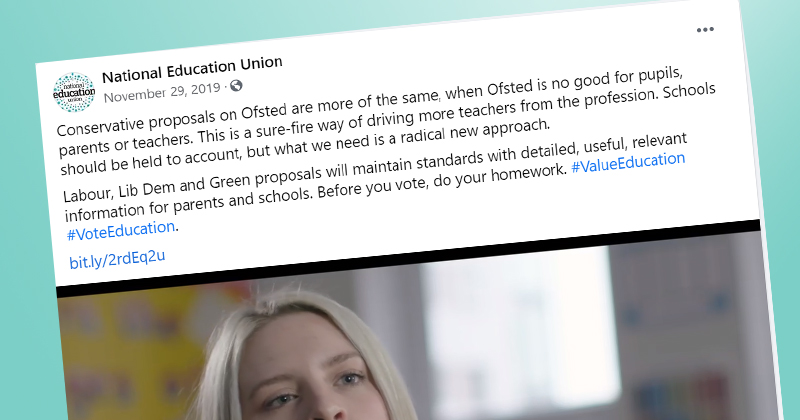 The country’s largest education union has been accused of flouting rules over a “political” Facebook advert critical of Conservative party policy that it paid for in the run-up to last year’s general election.

Figures published by the Electoral Commission earlier this month showed the National Education Union spent £505,000 campaigning in the 2019 election. It was the largest spend by any non-party campaigner, narrowly ahead of Momentum.

The union said the spend came from general funds, as the campaign’s “main purpose” was to inform voters about each party’s education policies, not persuade people to vote for a particular party. The campaign was titled “Value education, vote education”.

However, a Schools Week analysis of invoices published by the EC show the union paid Facebook to promote an NEU post that stated the Conservative Party’s proposals on Ofsted were “more of the same… This is a sure-fire way of driving more teachers from the profession”.

It said proposals from Labour, Liberal Democrats and the Green Party, who had pledged to scrap Ofsted, will “maintain standards, with detailed, useful, relevant information for parents and schools”.

A government document on trade union political funds states that a union wishing to “spend money on party political activities must set up a separate political fund for financing any such expenditure”.

One example of such spend is described as the “production, publication or distribution of any literature, document, film, sound recording or advertisement the main purpose of which is to persuade people to vote or not to vote for a political party or candidate”.

Robert Dougans, partner at Preiskel & Co law firm, said as the advert “specifically criticises Conservative Party policy, and comparatively praises opposition party policies, in the context of a general election campaign, it is entirely reasonable to construe this as political campaigning with the intention of influencing votes”.

“As such, it would be subject to the Trade Union & Labour Relations (Consolidation) Act 1992 clauses on expenditure of money on political objects. It is unlawful for trade unions to spend such monies from their general fund.”

Spend on the post, totalling just under £1,300, appears in five invoices. One invoice shows the post had nearly 79,000 impressions.

The NEU invoices submitted to the EC had the word “members” handwritten next to some expenditure, including the post referenced above. NEU said this was because the post was only promoted to its own members so it did not meet the “public test” to be declared as regulated spending.

A spokesperson added the union “refutes the accusation” that the post in question should have been declared as spending from a political fund.

“The Facebook advert used as an example by Schools Week does not direct people to vote or not vote for any particular party, therefore it was not subject to the provisions set out in the Trade Union & Labour Relation (Consolidation) Act 1992 regarding the use of political funds.

“Further this advert was promoted only to our own members and any visibility to the wider public would only be if the member chose to share it onward; the advert did not request that members should share it onward.”

However, Conservative MP David Morris said the “paid advert is clearly party political, suggesting teachers should not vote for the Conservative Party.

“The law is clear, such advertising must be paid for out of a union’s political fund, not their general fund. I have written to the Certification Officer requesting an investigation into this matter.”

A spokesperson for the Certification Office, which regulates unions, said it wasn’t able to comment on the matter.

Annual accounts for the NEU, which cover an eight-month period up to August last year, show the political fund balance had a £6,594 deficit.

In 2016, the Conservative government brought in new laws requiring union members to opt in, rather than opt out, from paying towards their union’s political fund.

It was reported last year that Unite union, one of the Labour party’s biggest donors, had a fall of over 100,000 members paying into its political fund since the move.

The NEU’s accounts state its political fund was established to “allow the union to undertake campaigning of a political nature”.

“Expenditure in connection with political activities must be charged against this fund,” it adds.

The EC invoices show the NEU spent around £450,000 on “manifesto or referendum material”. Another £40,000 was spent on market research.