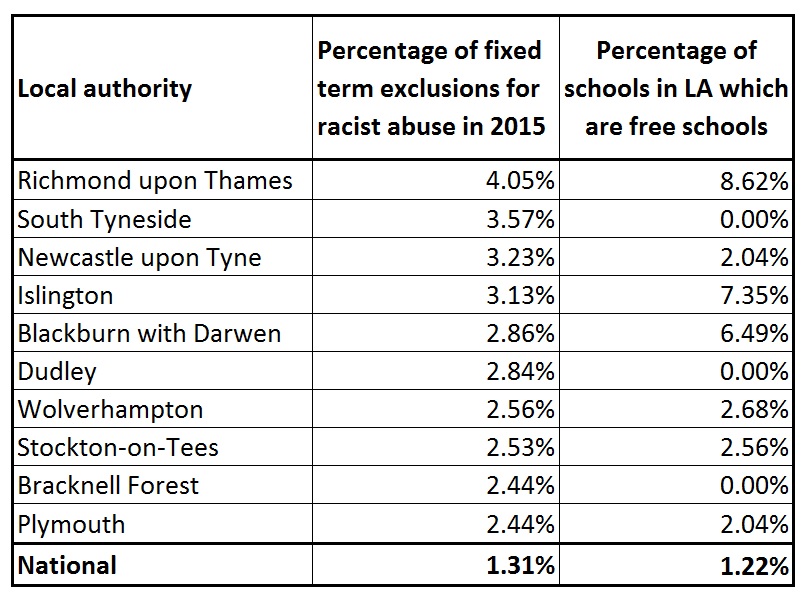 Allowing free schools to open where there is a “social need” would increase community integration and help prevent racist abuse in classrooms, a free school campaign group has claimed.

The New Schools Network (NSN) has today released an analysis of exclusion data that reveals 20 children are excluded from school each day for racist abuse, arguing that the new category of opening free schools where there is a “social need” would allow groups to “create schools designed to build community cohesion”.

But Schools Week’s own analysis of the exclusion data has found that free schools are actually more likely to exclude pupils than other schools.

The NSN highlighted there had been 4,000 cases of racist abuse in England’s schools that led to a fixed or permanent exclusion in the 2014-15 academic year.

The charity also said there has also been a 20 per cent rise in the proportion of total exclusions that were categorised as racial abuse since 2008-09 – despite overall exclusion numbers falling.

These are spurious claims for setting up a free school

“The addition of a ‘social need’ category in the free school criteria opens the door further for schools, charities and other community organisations to come forward with ideas to create schools designed to build community cohesion.”

But Schools Week found free schools are more likely to exclude pupils than local-authority maintained schools and converter academies at both secondary level and at special schools.

The figures do not break down reasons for exclusion by school type.

The NSN used figures for the amount of fixed term exclusions in each local authority as evidence that more social integration is needed, and that free schools can fill that gap.

But our analysis shows that of the 10 local authorities highlighted by the NSN, seven already have a greater proportion of free schools than the national average (see table above).

Henry Stewart, from Local Schools Network, a campaign group that supports locally maintained schools, said it was “absolute nonsense” to claim free schools would increase social cohesion, and added: “These are spurious claims for setting up a free school.”

Janet Downs, also from the Local Schools Network, said it was “odd” implication that free schools would “solve the problem”.

“There’s no correlation as far as I can see between a reduction in racist abuse in schools and the presence of free schools. And even if there were, correlation isn’t causation.

“This is pretty desperate stuff from NSN trying to justify spending taxpayers’ money on schools where there may already be surplus places and justifying this by saying there’s a social need. Many free schools so far have been set up on religious grounds – these are likely to increase segregation among children not bring them together.

“The OECD found that increasing school ‘choice’ had no impact on school performance but did increase social segregation.”

The NSN said it was unable to comment further when presented with the findings from Schools Week’s analysis.

But Pearson added: “We are already in discussion with a number of groups who have particular interest in community integration, and we anticipate that more will now follow in their footsteps.”

The government has pledged to open another 500 free schools this parliament, a target that department officials have admitted is going to be a “big challenge”.

Last month, the Department for Education updated its guidance on the application criteria for free school bids, and included a new option for social need, describing this as opening a school to “address a social issue” such as bringing together pupils from different faiths or ethnic groups.

However Schools Week reported how this sparked concerns of a “free-for-all”.