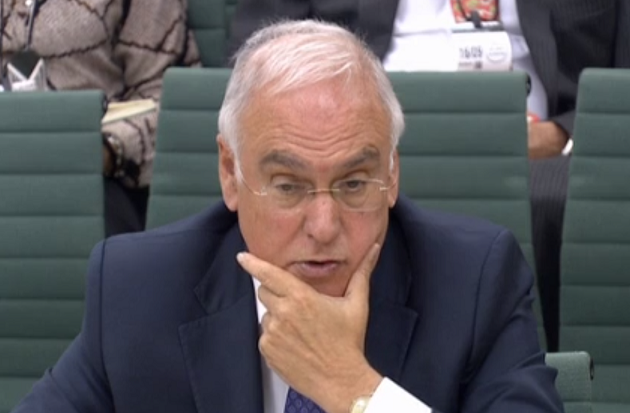 Here are some of the highlights of what he said…

Sir Michael said that a lot of the criticism of Ofsted comes from people working at, or who support, schools which received less than favourable inspection grades.

Sir Michael admitted his organisation sometimes got it wrong, but had a word or two for his critics…

"Where inspectors have to make a personal judgment, then sometimes they will get it wrong, it's inevitable" – Wilshaw #edselctte

"The people who make those accusations of inconsistency actually don't investigate in much detail," says Wilshaw #edselctte

2. Wilshaw thinks Ofsted and the Regional Schools Commissioners should cover the same areas

RSCs and Ofsted’s regional structure are both relatively new to the education scene, but Sir Michael suggested this morning that there could have been more joined-up thinking about their geographical representation. (Ofsted regions were created first).

Asked how Ofsted will monitor the operation of the CIF, Wilshaw says it's up to new regional directors to make sure system works #edselctte

3. The fact 1,200 inspectors have been “let go” by the watchdog doesn’t mean we should be worried about the inspections they carried out

The news that hundreds of former Ofsted inspectors have not had their contracts renewed under plans to bring inspections in-house led to a series of questions for Sir Michael.

But Sir Michael’s argument is that not all inspectors were dropped because their work was sub-par, but because Ofsted is hoping to use more trained HMIs and serving school leaders.

"I made a commitment that more inspections would be led by HMIs, that we would have more serving leaders" – Wilshaw #edselctte

Asked whether, in context of the 1,200 inspectors let go, he has confidence in previous inspections, Wilshaw says he has #edselctte

Wilshaw on inspectors let-go: "Some of them may not have been good enough, they were a minority and they were under scrutiny" #edselctte

4. There is too big a focus on the legal structures of school when the government should be addressing teacher shortages

This morning Sir Michael became one of the many people calling for an end to the government’s obsession with structure. He referred specifically to academies and free schools, and said we should focus on “capacity issues”.

Wilshaw: "We talk too much about structure. The debate should move on to capacity issues. Have we got enough teachers?" #ofsted #edselctte

5. Teachers are not being put off by Ofsted

On teacher retention, Sir Michael spoke about his experiences to trying to enthuse young teachers, and denied allegations that pressures supposedly created by Ofsted were forcing people out of the profession.

"The thing that puts off teachers is working in an institution which is not good and poorly-led," says Wilshaw #edselctte #ofsted

"It's not Ofsted [which puts people off teaching]. That's a bit of a red herring," says Wilshaw #edselctte #ofsted

Ofsted has been heavily criticised over its handling of the Trojan Horse scandal, which involved extremism in schools in Birmingham.

But this morning Sir Michael defended the fact Ofsted had previous judged some of the schools involved as “outstanding”, and said it was his organisation’s lack of routine re-inspection of such institutions which had contributed to problems with identifying the issues.

Earlier this year, the Department for Education gave Ofsted permission to issue letters to MATs if inspection of several of their schools led to concerns about their overall operations.

But these letters have no legal weight and can simply be rejected by the trusts involved. Wilshaw wants more.

On MAT inspections, Wilshaw says: "We have identified schools which have declined since they have been taken over" #ofsted #edselctte