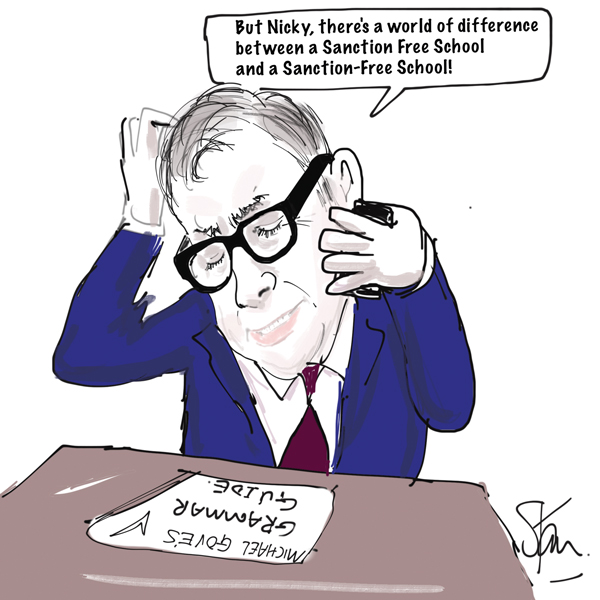 A Lancashire primary school has won many admirers for its sanction-free approach to pupil learning . . . and now it can add a TV star and former Fleet Street editor to that list.

During last week’s Festival of Education at Wellington College, journalist and television personality Piers Morgan was asked by Charlotte-May Tomlinson, a former pupil of Barrowford School, for his thoughts on a sanction-free school – where pupils don’t get punished.

Anthony Seldon, the headmaster of the independent Wellington, jumped in: “Does it mean you don’t have naughty children?”

To which Charlotte, now in year 7 and one of six former or current Barrowford pupils who attended the two-day festival, replied: “We don’t believe there are naughty children.”

Morgan, the former editor of the Daily Mirror and judge on America’s Got Talent, said: “As long as you learn from mistakes then I don’t think it’s a bad thing. Discipline is important but making kids accountable for their actions is much more important.”

Barrowford School, a 355-pupil primary in the former industrial town of Nelson, has been sanction-free for four years. Instead of punishment, pupils are encouraged to talk through their actions and feelings before agreeing a solution to move forward.

“Ninety-nine per cent of the time, all the children need is an apology,” head Rachel Tomlinson told Schools Week.

She explained the school’s core value was “unconditional positive regard”, adding: “It’s safe to make a mistake, in learning and in relationships. Things go wrong every day. But if they go wrong there’s no risk of the children not belonging anymore.”

Pupils have a restorative conversation if there is conflict, facilitated by teachers for younger children, to talk through what happened and how they feel.

“Our pupils are hugely emotionally literate. They can put names to their feelings, articulate them and recognise them.”

He told the BBC that some schools allowed disruptive pupils to stay in the classroom, rather than exclude them, to hide bad behaviour from Ofsted inspectors.

But Ms Tomlinson said that the punishment system in schools “robs the victim and perpetrator of the things they need”.

Barrowford’s system is based on restorative justice, which focuses on the needs of victims and perpetrators, rather than just punishing the offender.

No pupil has been excluded, permanent or temporarily, in the seven years Ms Tomlinson has been at the helm.

“What’s also happened now is that lots of kids come to us who have been excluded from other schools (some in reception), and they are incredibly successful in our system.”

The school was rated good by Ofsted in 2012 with inspectors praising the “moral, social and cultural” awareness of pupils.

Barrowford has since also gone “reward-free”, with all stickers, certificates and house points scrapped.

“We used to reward positive behaviour,” Ms Tomlinson added. “But quite quickly the children told us that it was unnecessary. They learn and behave because it’s the right thing to do – it became intrinsic. It’s celebrated now, but not rewarded.”