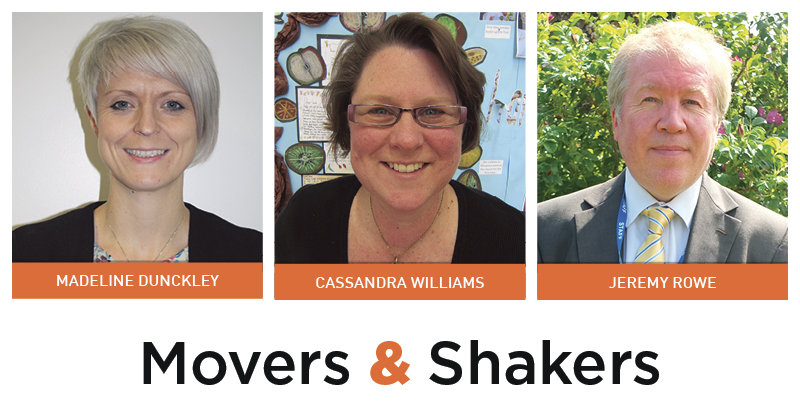 Madeline Dunckley has been appointed principal of Thorplands academy in Northampton. She was deputy headteacher of St Gregory’s Catholic primary, also in Northampton.

Thorplands became an academy in April 2013, and is one of 12 primary academies across Northamptonshire within the Education Fellowship Trust.
Dunckley, who has a BEd from the University of Hertfordshire, has worked in a range of primary schools throughout her career, working with children from a wide variety of faiths as well as pupils from difficult backgrounds.

She said of her appointment: “I’ve come back to where my heart lies with this job. Working with kids in difficult situations is what I want to do. Growing up where I did, that’s where I was – and I want to give them the same opportunity.”

Bright Tribe has made two new appointments in Suffolk schools.

She was headteacher of ThurtonChurch of England primary in Norfolk for just over six years.

Under her guidance, the school gained an outstanding rating from Ofsted, and was chosen as a case study for primary schools in the chief inspector’s 2015 annual report.

Williams, a lead Ofsted inspector, has spoken at many national and regional conferences about how children learn.

Her new role is to challenge and support the leaders and to ensure a strong leadership team across the schools, with an emphasis on joint working, taking an innovative approach and maintaining the high standards expected at each of the schools within the trust.

She said that she was most looking forward to “helping heads to be the best that they can be” and “seeing teachers blossom” as she embarks on her role, which involves liaising and guiding senior members of the primary academies.

She has already begun implementing a “can-do” ethos within the school to raise the aspirations of pupils.

He was appointed in June on an interim basis, but his position was made permanent this month.

Rowe was head of Sir John Leman high school in Suffolk for eight years. The school is in the top 3 per cent in the country for its GCSE improvement, as well as having earned a national reputation for  behaviour.

In 2015, he undertook a two-term headship at a school in Norwich, playing a pivotal role in improving GCSE results. Under his leadership, it became the third most improved school in the county.

Speaking of his move to Alde Valley, Rowe said: “I’d worked up the road for eight years, and I knew the school. I’d been really worried about its decline and so it was a great time to go there and do something about it.”

Rowe plans to develop the ethos, behaviour and morale at the school through a strategy he has developed throughout his career.

If you want to let us know of any new faces at the top of your school, local authority or organisation, please let us know by emailing news@schoolsweek.co.uk