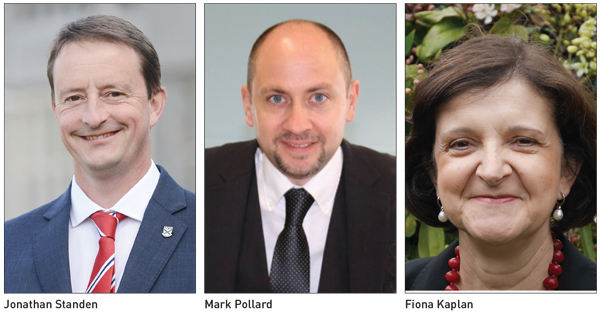 Jonathan Standen is the new head of Plymouth College. He was head of The Crypt School, a grammar school in Gloucester.

He says his move to an independent school after 20 years in the state sector feels like a “promotion” and he is looking forward to the “freedom” from many government initiatives.

“In the state sector we seem to be really focused on academic achievement. When the powers that be [Ofsted] come and look at your school they only give a scant look at the wider aspects of education that are really important.

“It is increasingly difficult to prioritise extra-curricular enrichment opportunities that are so vital to helping young people develop a rounded personality. And
that is something we will aim to achieve here, whether it’s academic, sporting, musical, theatrical, debating and so on.”

The 47-year-old went to the University of Nottingham where he studied ancient history and history.

Mark Pollard has taken over from Julie Farr as the new headteacher at Bishop Perowne C of E College, Worcester. She is stepping down after more than 20 years at the school.

Mr Pollard, who was deputy head of Wolverley C of E secondary, also in Worcester, says the “extremely strong Christian ethos” running throughout the school gives it a platform to “not only go that extra mile”, but also “instil those values” in the students.

“In my career I have always found it best to have high expectations of my team and students — they typically live up to those expectations and discover that they are capable of more than even they had thought.”

Mr Pollard says the senior team will be highly visible among parents and students under his leadership, which will help him to “develop excellent relationships, improve communication, learning and conduct” across the school.

Fiona Kaplan has been appointed the first head of Ark Byron Primary Academy, in Ealing, west London, which opens in September. She was assistant head and early years leader at nearby Wendell Park Primary School.

Ms Kaplan has been working in education since 2001, mainly in early years departments.

She says she is attracted by the prospect of setting up a new school and plans on placing literacy, mathematics and citizenship at the “heart of everything”.

“I will be working with my team to ensure outstanding academic results and to ensure the children develop citizenship skills and contribute positively to their community.”

Ms Kaplan studied modern languages and Chinese studies at the University of Cambridge.

The 54-year-old says that she pursued a career in education after she had triplets and became “fascinated” by how young children learn.

“I saw that young children absorb new information at an amazing rate and that their enthusiasm to make sense of the world around them would make teaching the most satisfying and rewarding job.”