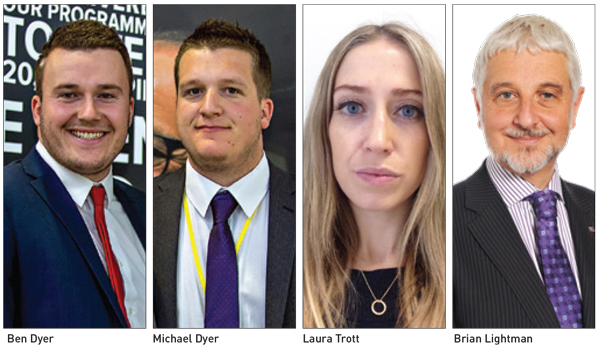 Ormiston Trust has announced that Ben and Michael Dyer, founders of the National Enterprise Challenge, and Laura Trott, an adviser to David Cameron, will be its first patrons.

The trio will act as ambassadors and advisers to the charity, sharing their professional knowledge and expertise.

Cousins Ben and Michael Dyer founded the National Enterprise Challenge in 2012 after working in enterprise education for several years, including with the Chambers of Commerce and the BAF Diploma.

Michael Dyer said his main aim as patron will be to promote the trust and to get young people “thinking about enterprising skills and entrepreneurship, which is something we are passionate about and have been doing for a long time”.

Ben Dyer added: “We would like to ensure all of the young people in the trust’s schools have got that enterprise mind-set so that they want to raise their aspirations as well as developing their key skills.

“We want to encourage them to build their teamwork and leadership abilities which will only make them more employable.

“I think we can use our expertise as part of the role, and in doing that, we will be offering a good service to the trust and its students.”

Laura Trott is a key adviser to Downing Street. As head of strategic communications she coordinates what is being announced every day.

Ms Trott said: “I have always believed that where you are born shouldn’t determine where you end up.

“The work of Ormiston Trust, through Ormiston Academies Trust and Ormiston Families, helps children and families to really fulfil their potential.

“I am honoured to become a patron and help the trust extend its reach even further.”

Ms Trott studied history and economics at the University of Oxford.

Brian Lightman has stepped down as general secretary of the Association of School and College Leaders.

Malcolm Trobe, the current deputy general secretary, will take over on an interim basis until the association appoints a permanent successor.

Mr Lightman, who has held the position since 2010, will set up an education consultancy, but has pledged to continue supporting school leaders.

Asked about the biggest challenge now facing school leaders, Mr Lightman said: “In the face of many changes and financial challenges, keeping hold of their vision for education and making sure they are not distracted from why they all came into the job – to enable all young people in our care to achieve the very best.”

Mr Lightman was also president of the organisation from 2007 to 2008.

A graduate of the University of Southampton, he started his professional life as a modern foreign languages teacher in the south east.